Wow, that was not insulting or even Rude.

Jason only sugested a workaround, (I think just the same reading that thread) If Greg said that no one knows why the IDE does that (

) and no one has being able to fix it, just “add a final pass filter in the text output stage to “solve” the issue.”

The rude Xojo answer: “This will get fixed when it gets fixed.”

Hey that’s part often show they get payed every year for.

I think there’s been a misunderstanding. I mean “it adds up” in a bad way, like the comments add up to show that the company doesn’t respect the users.

I got that but it changes nothing. That makes all the problems. And yes ihr shows that the company does not respect users. You’re fully right

After merging the posts into the first locked thread by Anthony, Xojo edited Julian’s post removing “since you like being forum god”. 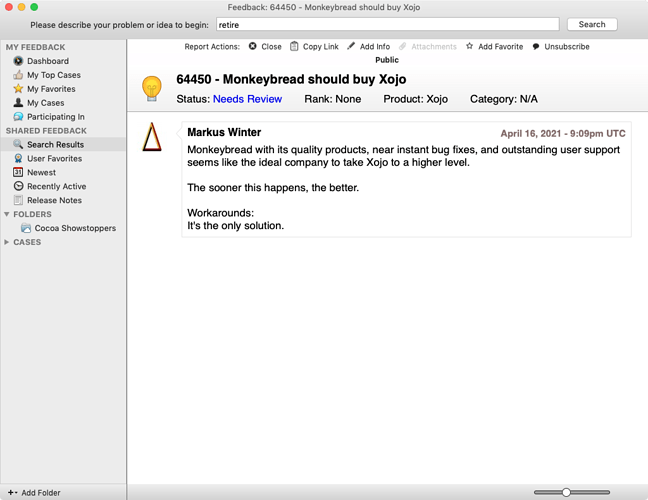 absolutely fecking awesome, one of the best things I have EVER seen…ever

Please don’t make such requests. That doesn’t help anyone.
And I assume it’s quickly deleted by staff. And if not, I would request it’s deletion.

I think your time on TOS is almost over…

although a higher level is not actually required in my mind.
a reasonable level, make stuff work, fix stuff, DO NOT ADD ANYTHING AT ALL FOR A YEAR.
drop the stupidity of thinking android is a xojo thing.

give greg a break, he obviously has no idea about web apps, let him do bug fixes and make the product halfway good again.

result, most people on here complaining about xojo (including me) would buy a pro licence again.

anyway, I am just about to get out of the shower…(if anyone gets that reference?)

I said before the people are angry at the moment and the behavior of the staffs is not really helping nor bringing any solution. That’s why this is coming up

no but its funny and makes the day go by with a bit of joy, sometimes even Marcus approach to things makes some sense!

its also good to see you posting here Christian

I think you meant to say he is redefining the term “lifetime ban”.

Please don’t make such requests. That doesn’t help anyone.

Come on, people take themselves way too serious …

The feature request is very tongue-in-cheek, expresses what a lot of people wish for, and is not breaking any rules. I could have also expressed it as “Put more emphasis on bug fixes and creating a stable platform” but where’s the fun in that …

And they already deleted it!