Xojo is made for Mac Development

When started with Xojo I used the IDE on Linux and Windows. Never on Mac. I had tons of Issues with the IDE, starting with the fact that under Linux there is no local Help and going further that the IDE under Windows is crashing, not performant and sometimes not working as expected.
While I switched my Company Hardware to Mac (yes, the M1 is really a nice Idea) I also installed the Xojo IDE on the Mac and what shall I say? Behaves like it is another Software. The IDE is running well even with big projects, local help is available and much much more even with the 2019R32 Version on Big Sur.

Left me with the question to Xojo company: why Xojo was promising Windows and Linux IDE and delivering only MAC, why it is optimized and really working only on Mac? Are Customers with Windows and Linux not important for you?

And please no arguments Xojo has a good IDE you have to develop on Mac its anyhow better…I had to listen this arguments for a long time. No. Linux and Windows are performant as well for Java Development, C# Development, C++ Development and so on.

This incident is happened while Xojo was never taking care as much as needed for the other OS platforms.

I think the answer is simple: xojo team works with macs.
they build xojo using xojo … for mac.
it is a cross platform tool, they make some examples apps on win and linux
but there is no better test than using the software really yourself.
for the same reason B4x is made by people mainly on windows, and look bad experience on a mac.

for the same reason B4x is made by people mainly on windows, and look bad experience on a mac.

With that difference that B4X does not claim it does work on Mac or Linux. It is clearly stated it is a Windows program and hence not intended to be used on Mac or Linux.

you’re right.
what I mean is that each dev tool has a main platform it has been made on. it may work with other platforms, but the experience is different
same with VS on win/mac

IMO, the argument, that a development tool has a main platform, isn’t correct. Take a look on Java dev tools like IntelliJ IDEA, Eclipse, NetBeans. All of those work without problems.

I by self am developing for different projects and customers with the following ID´s on Linux, on Windows and now also on Mac and there is no, really no difference in functionality, power, usability or anything else where I could say: see, that’s not it’s platform:
Netbeans since Version 3 I guess, can be Version 2 I don’t know anymore!!!
Eclipse since it is free available
IntelliJIdea since it is born
CLion since it is born

This Shot was directly in the knee. While there is no “major” platform for the big ones except Microsofts Visual Studio which is fully available only on Windows Computers.

So There is an argument coming up: Xojo wrote for MAC and got it running barely on other platforms and sold for ALL platforms like it is builded correctly running.

Evidence that it is not: show me the running Help System offline. Yes, you read correct: on Linux with Xojo 2019R32 there is no offline Help. Makes it nice to work with it. While there is no Online documentation anymore for this version. While Xojo changes the documentation instead of building a variant for the different versions where the customer could even have a chance. I had to write an own viewer. The Answer of Geoff Perlman: “When you are ready with the Help Viewer you can spend it to the community so Linux users have Online Help”. Sorry. Mud.

If you sell for all platforms you have to run on all platforms. And not trying to run with testing on a parallels machine under MacOS and wondering that there are big differences in the real life to living machines instead of virtualization of the testing environment.

So there is no “major” platform. There is a platform provided which is running or not running. Nice difference is: with all other platforms you can build for free. I guess they would not find enough paying guests with a sales model like IntelliJ

VS on Mac is just Xamarin Studio with a new GUI and a few new features.

Just another short sighted desition of the company.

20 years ago, when VB clasic was abandoned, millions of developers looked for alternatives. Xojo did some marketing to lure them, but unfortunatelly the tool was not near as capable as VB6, if only Xojo had a better tool on windows, they could have grown really big with the windows marketshare.

Some numbers on Desktop OS marketshare this days: 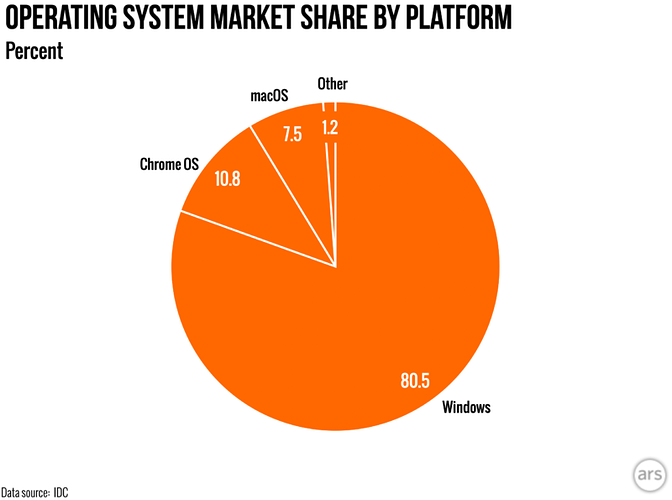 And an interesting poll in TOF 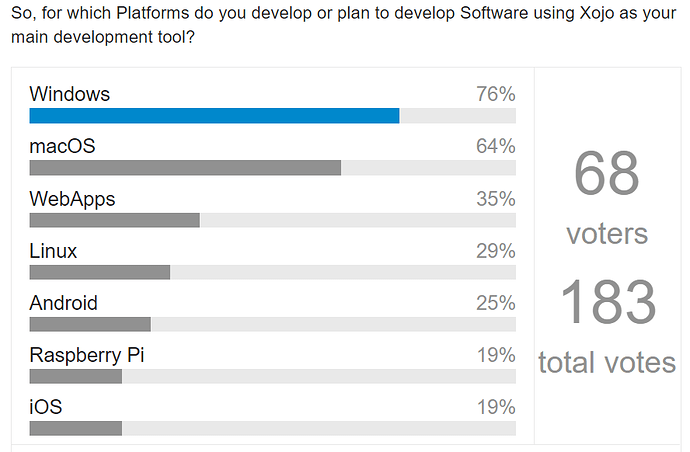 What Platforms do/would you use Xojo for?

At one time I read somewhere that Mac owner on average bought more software and at a higher price point than windows ownerse.

Don’t know if that is true today (or ever actually!

Most such apps tend to be small to medium in size. Keeping up with recent UI trends faithfully is also not needed - as long as teh UI reasonably intuitive for most users. They also often don’t a lot need fancy capabilities… But usually do need good DB connectivity.

Since the late 80’s I have always worked at places that had a mix of PC’s and Macs.

But for now, I think it is still a reasonable tool for that usage.

But given it looks like there will be more significant competition in that space in the relatively near future, they need to do better.

My Customers having all mixed environment so I was installing Java 11 on all platforms. Software written for the Customers as Java Software runs on all of their platforms much more reliable than any chojo peace of Software. The IDE is anyhow not really Cross Platform compiled while it leaks on Windows and Linux. With Java I hav none of that problems,

But I feel ignored, and unappreciated a lot of the time, as do I suspect most of you. Which is why we’re here.

25% vote for a non existing platform, madness.
also you could easily say (as with any statistical analysis) that windows users of xojo are more likely (or more quickly) to reply to a poll, or the poll is set up so you can vote more than once for your favourite answer…

Platforms most of use use Xojo or would like to use Xojo.

Pretty sure the folk answering ‘Android’ to that just wanted to say ‘hurry up’ to Xojo.

My sales are almost exactly split 50/50 Mac and Windows.
I target home & small businesses, so the fact that most larger businesses out there have a PC on the desk isn’t important: they won’t be buying anything from (specifically) me

While I agree with the points that Sam made… there is one major flaw… Xojo has flatly stated that “New user (read Newbies) are its target audience, Not ‘Pros’”, and I (my opinion) think that major reason for that is a “Newbie” 1) won’t find bugs (or realize something IS a bug and 2) will be more easily swayed by the bullshit answers that Xojo will use to convince said “Newbie” that there is “nothing wrong”

There are many people with Mac and many with PC and even many with Linux. What all of them need: reliable program. And that is not really possible. Especially the Software life cycle can not be granted with Xojo Language.

So I guess there will be a later chance for Realize that: Xojo is at the end of it’s dedicated life cycle if they do not change their releasing.

I remenber those bullshit answers
“You are the only one complaining about that”
“It is not a bug, it works like that by design”
“It is a problem with windows, not Xojo”

I remenber those bullshit answers
“You are the only one complaining about that”
“It is not a bug, it works like that by design”
“It is a problem with windows, not Xojo”

It’s hard to make the realization about the state of Xojo. I mean, I still hope, but I realize that Xojo isn’t likely to be mostly bug free. Xojo has to care. Right now they are throwing code on the wall and letting users try and sort it out. That’s not workable for a pro.

Xojo doesn’t even have a public workarounds page. Everyone has to go figure out all the workaround on their own as they run into it. If Xojo cared, they’d publish work arounds until fixed and shipped.