What other tools have people tried ?
I’ve looked at Lazarus, Delphi, and now am peeking at one from RemObjects called “Fire”
Bob’s also looked at some of these

Delphi only runs on Windows

And after speaking with 3 different engineers at Embarcadero I understand why. Delphi is written using Delphi BUT there are multiple frameworks you can use and the one Delphi is written in is not cross-platform

And the compiler apparently relies on MS compiler toolchain so its not portable.

The RemObjects IDE is also mostly a text editor

I played with Python quite a bit but I’ve not been able to find a reliable cross platform UI framework to link to. The most promising candidate was Toga bits it’s super rough around the edges on Windows.

I also think B4J/B4X from Anywhere Software is a pretty good Xojo alternative. It was good enough to tempt Alain Bailleul away from Xojo. His Xojo/REALBasic code was great. Incidentally, there’s an FTP dump of his previous RB good that mostly still works here.

I think bob did a reasonable job of trying out products that claimed to be x-platform IDE’s. And not just project managers/text editors like I’m finding Fire is

They are few & far between

Which is what drives me nuts about Xojo - they actually have a niche and do a good job but just dont have the will(?) to pursue things in a way they deliver EXCELLENCE on any of the targets

If all they focused on was delivering an excellent implementation on Mac/WIndows/Linux & skipped new baubles like Pi, Web, iOS, Android they might have a chance but with such a small team its hard to see how they can do a great job across 7 or 8 targets that all evolve rapidly.

FWIW I agree with you about Python (and there are others like Go, Rust, Mono and Xamarin) that all make claims about being x-platform but the reality is way different

Couldn’t have said it better @npalardy. I do wonder why Geoff doesn’t just invest in a few more engineers and buckle down on quality. The product is excellent and there is a decent sized niche for it. One would hope he would recoup his investment as the product improved in quality because the idea of the all-in-one-IDE is so appealing.

I tried Fire too, with the free Swift language support, and while I like the editor and the speed of its autocomplete, I am pretty lost with Xcode as Interface editor.
The option to add Mercury as a Visual Basic compatible language sounds promising, but I wonder how xplatform development would be possible without an IE that does the native translations.

I’m also playing with Fire (pun intended) at the moment. Whilst it’s not a Xojo replacement (no GUI editor) if your needs are console application-based then it’s fantastic. I’m currently porting my bytecode VM to Swift with it and it’s really slick with very responsive developers. Writing Swift for Windows, macOS and Linux is really cool.

As mentioned before, I am attempting to create my own “Xojo replacement”

It hopefully will be able to create both macOS Desktop, and iOS Mobile applications in a manner similar to how Xojo creates Desktop. Originally I was writing this in 100% Xojo, and had created operational proof of concepts that created actual compilable Xcode project for both platforms. But last week I decide to do a ground-up rewrite in 100% Swift instead. And boy have I learned ALOT in this week!

Here is a snapshot of the current state of my IDE. I am writing the Property Inspector control now… All the controls in this screen shot, “work” as in the drag-drop, collapse/expand, react to mouse clicks as appropriate 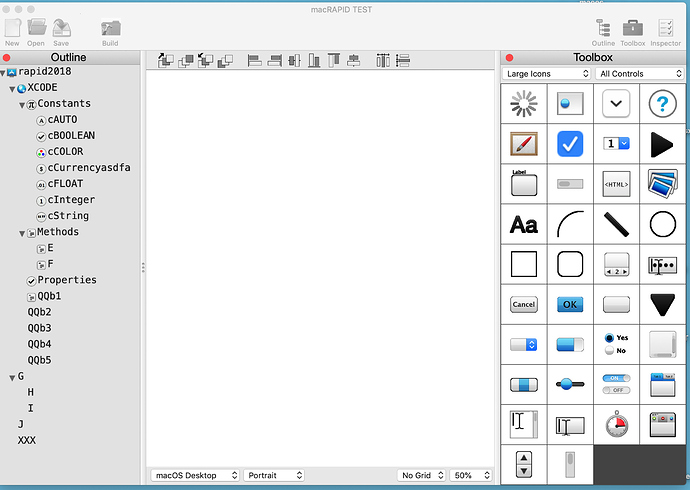 Is the plan for it to be used to code Swift or Xojo (or some other language)? Will there be a Windows/Linux option?

The idea is for the developer to create a project in a manner similar to Xojo, using the drag-n-drop features to built the UX, and adding code/events to it. The “language” would be a custom variation of BASIC (just like Xojo is). It would then take that project file and create/translate it to Swift, pass it to Xcode to be compiled.

Since it will be Swift/Xcode output, there will be no Windows/Linux option

The idea is for the developer to create a project in a manner similar to Xojo, using the drag-n-drop features to built the UX, and adding code/events to it. The “language” would be a custom variation of BASIC (just like Xojo is). It would then take that project file and create/translate it to Swift, pass it to Xcode to be compiled.

Sounds like it will be an insane amount of work. Are you planning on selling/marketing this?

Since it will be Swift/Xcode output, there will be no Windows/Linux option

Sounds like it will be an insane amount of work.

Would you possibly consider something that creates Xcode layouts that could be used in VS/Code? (No complier/language creation required in that case). It’s the missing link in creating x-plat apps for C#.

Not sure what you are talking about… but to be honest, as you said this is an “insane” amount of work, and I don’t want to introduce “scope creep” before I really get started

I understand. It would actually be a smaller/easier project as you don’t have to write a compiler or language. Basically if your IDE can already create the Xcode for a GUI, then you’re pretty much already there.

You’ve already done the part that nobody else could do, it would seem!

Yeah… but I think you misunderstand one part of this project

Yes it will produce the UI/UX portion of the project… HOWEVER…it does it in 100% code… It does NOT (and will not) produce a XIB, NIB or related file…

Yes it will produce the UI/UX portion of the project… HOWEVER…it does it in 100% code… It does NOT (and will not) produce a XIB, NIB or related file…

Sorry, but that’s way over my head. I’m not a Mac guy so I don’t really know how it all works. Would love to understand it though, if you have some links or have time to explain?

I also think B4J/B4X from Anywhere Software is a pretty good Xojo alternative.

Looks quite interesting… but a cursory look on the website shows no Mac IDE? (even though i can compile for Mac and iOS, which is strange…)
Is this right, does anyone know?