Official Xojo survey: how likely are you to recommend Xojo?

I wonder if Xojo have ever seriously considered buying Monkeybread and folding it into the software. Same goes for many other 3rd party plugins/controls. Sure it’s an upfront investment but given their lean engineering team it strikes me as a sound investment.

I wonder if Xojo have ever seriously considered buying Monkeybread

Given Geoffs outlook I doubt it ever crossed his mind

Please no. MBS is not only good for what it is, but Christian’s phenomenal support responses. Keep Christian lean and keen.

Whilst I agree that Christian is a fabulous community asset, many of the functions that his plugin provides are essentially required if you want to do any real work with Xojo. I think it would be very beneficial for the whole community of people weren’t expected to fork out £200 for the plugin.

I’ve never heard any such talk

EDIT : and “am I likely to recommend Xojo” … middle of the road - maybe a 5 or 6 for all the reasons people have cited

But Xojo has never really worked with plugin devs to push that market - its why after 20 years there are really still only 2 plugin developers of any significance. MBS and Einhugur. If Xojo worked with them to build those things that Xojo hasnt the time or skill or whatever to do and promoted those businesses then you could end up with a decent market - much like MS did so long ago with Crystal Reports. Included a “lite” version of whatever these authors create and watermark it in the IDE so folks know there are “Pro” versions - but the lite versions are still useful. Same for BKeeney Shorts etc

There are lots of those sorts of add-ons that Xojo would use and the authors could use help promoting to the wider audience.

But, as I said, whenever I talked about this with the powers that be it fell on deaf ears and … well … here we are same old same old

I see lots of comparisons between Xojo and other programming languages, but I don’t really think that many of them are fair as they don’t take into account the uniqueness of Xojo (and the reason I use it).

Specifically, comparisons should be limited to products that do all this:

I can count the number of products on 1 hand that can do all that. AFAIK, there’s only 2:
Xojo and Lazarus, and Lazarus (from what I read) doesn’t even have a 64-bit MacOS IDE and still uses Carbon for MacOS. So, really, there’s only 1.

I have no intention of changing your mind.

The questions are simply:

For me the biggest problem (after the bugs of course) is that Xojo has increasingly neglected it’s core Desktop market, eg things like the editable movie were removed instead of being replaced, long requested features are not being developed, especially the Windows side needs a major overhaul. When will that happen? Maybe 2023 or 2024?

And yes, Xojo is a unique product. It COULD be great, instead it is being run into the ground.

I think that is, in part, what frustrates so many long time users
It DOES have a real serious niche that it fills better than any other tool I’ve encountered
And yet the things that would really help it a lot and improve MY personal ability to recommend it more often are things they just dont tackle rapidly enough
Fixing existing reproducible bugs - personally I have about 25% of my bug reports in the reproducible status. And there are dozens more in the “verified” state.
But when I go look at my bug reports by last modified date there are 2 marked “fixed” out of the last 40, 9 needs review, 11 reproducible, 15 reviewed and a couple that were closed
Not getting things fixed fast enough has been Xojo’s problem since before I started there, while I worked there, and persists.

And contributes to the “low quality” perception that seems to abound

And contributes to the “low quality” perception that seems to abound

Quite early on I explained that the problem with feedback is that bug reports are mostly “singular” (eg “if I’m not using what you are using then the bugs you see is not what I see”, as well as “a control might have many bugs, but while I might be hit by one, you might be hit by another”) while feature requests by their nature are cumulative (eg “I want iOS”, “I want Android”).

So the skewed perception is that Xojo needs to bring features to market.

What is missing is that Xojo needs to bring “stable and mature” features to market. A focus on quality. What good is a feature if it is so buggy that you can’t use it? Or so limited that you can’t do what you need to do (iOS)?

At the end of a day I want to have a stable and well-working product. And to that end basic functionality has to be rock-solid.

Quite a few developers have reluctantly given up on Xojo, developers that contributed massively to Xojo with their projects, eg Tim Dietrich (see https://timdietrich.me/blog/xojo-2019-r2/). Can Hal Gumbert be far behind giving his latest posts:

I was really excited until I started using PHP while waiting. Xojo just has sooooo many bugs that I worry that it’ll take years before the bugs are worked out. Xojo just can’t keep up. :(. I’m sure Xojo Web 2.0 will rock someday…

Yes just look at feedback. When i was using the heck out of Web 1.0 I ran into many WebContainer bugs that I wondered if anyone really used Web. For some bugs, it takes years to get fixed. Like http://feedback.xojo.com/case/45691 which took shy of three years. I’ve spent so much time debugging issues like that. in the meantime, I haven’t found a PHP bug.

The feature set of Web 2.0 that Greg demoed at past XDCs does look amazing but it has to ship someday. Then bugs have to be fixed on a timely basis. Time will tell.

And THAT is what I hear when I talk to developers that have left. THAT is what is driving them away, the lack of quality, the sheer bugginess, that you can get started quickly but then you hit roadblocks that should have been fixed years ago.

I have no intention of changing your mind.

Just in case it was misunderstood, my last line was just a tongue-in-cheek reference to all those “Change my mind” memes. Probably not as funny as it was in my head. 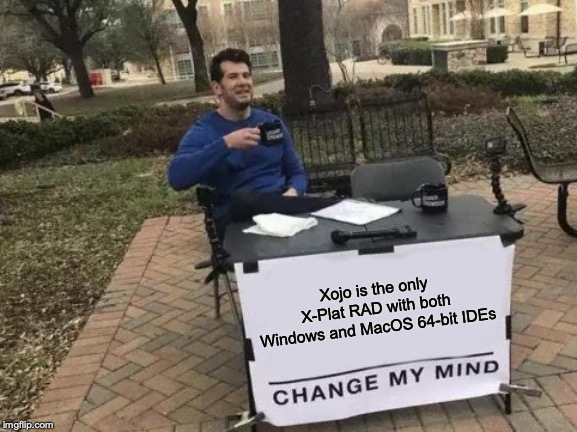 Can Hal Gumbert be far behind giving his latest posts

Well, I started using Xojo around 1998 and as of September I no longer have an active license.

I’ve created Desktop, Web, and iOS apps and made enough money to cover my Xojo and MBS licenses for the rest of my life. So the cost of Xojo is negligible in my mind.

For me, it’s about bugs and not being able to ship.

I create plenty of bugs on my own and don’t need to spend even more time tracking down, reporting, and then not getting Xojo bugs fixed. It wasn’t like this around 2005. I don’t recall that I ever found a bug back then.

How many years and months has it been since Web 2.0 and Android was announced? Desktop is Xojo’s only active shipping product while Web and iOS are essentially dead until Web 2.0 and iOS 2.0 ships. On top of that, we have no idea when those will be ready. Once they ship, how long will it take for the bugs to get fixed? Will they be left to languish?

As I said above in an earlier post, I haven’t found a bug in PHP yet. In the meantime, I’ll keep my eye on Xojo but by then I might not need it.

That video is hilarious!

I can count the number of products on 1 hand that can do all that. AFAIK, there’s only 2:
Xojo and Lazarus, and Lazarus (from what I read) doesn’t even have a 64-bit MacOS IDE and still uses Carbon for MacOS. So, really, there’s only 1.

Didn’t forget it. I’ve never heard of it. And I have been researching this for years. And I though Xojo was bad at self-promotion!

Thanks for the tip - I’ll check it out!

Crap. It runs on Java. Boo. I was so excited there for a minute.