Norman has been banned … again …

I wish I could say Xojo is not the same company that I used to work for… but that’s not true.

I have sensed that for while now. I no longer have the respect and trust in them I once had.

They really are only hurting themselves with banning Norm with how much help he provides.

Somebody was asking me to write her the Name of this forum on xojo PM.

Management reading PMs made on the forum, while legal, is a line I won’t tolerate being crossed. If I ever get an indication that has happened with one of mine, I will do all I can to make it known publicly.

What I wonder is if the behavior the company is exhibiting is because of the company being under severe financial stress, so they want to stifle anything that might have any chance (in their minds) of hurting sales. Basically panicking.

But the result of all that is that they are disenchanting existing users… and keeping users is a lot easier than getting new ones so it is likely to exacerbate that problem, if it exists.

Welcome aboard @thommcgrath and it’s great to have the father of Web 1.0 around!

Glad you made the jump too @thorstenstueker especially with all that’s been going on over in the official forums.

@Karen That’s my biggest fear in all this!

If Xojo goes under or has to cut back staff, we’re all hosed. I know Web 2.0 has had a rough start and I’m afraid finances may have come into play with the awkward launch.

I think I am unbanned there now, download the new release, I doubt it needs me going on the forum to advise anyone not to bother.
I will likely remove my account as soon as my current licence ends in December, having paid what I feel is a considerable amount of money for a Pro licence and basically got a pile of shit in return, I would like to get my money back.
some one must be an absolute asshole to consider its a clever idea to ban Norman, my respect is for him and not the clowns steering the xojo ship right now.

Was the thread about Norman being banned removed from the main forum? Can’t find it. 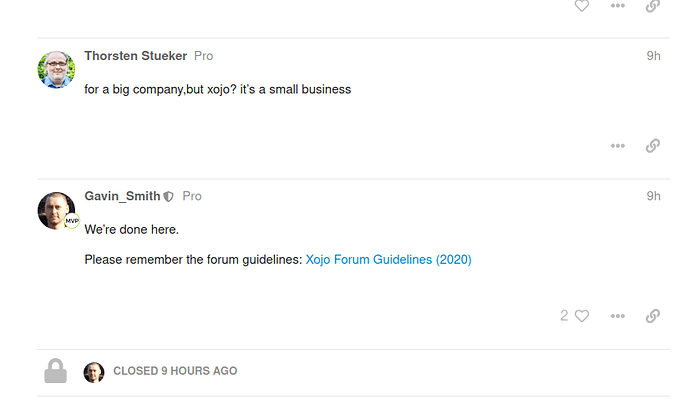 And yes, as expected they removed it completely.

Stormtroopers is the right word. Best on it: mostly they do not even know what they are doing. I got used to the fact that the most answering people have no Idea and are not getting what I am asking for.

So for me the Story ends exactly at the point where they where banning Norman. 1000 Years Ban shows in my oppinion a mental problem and not a reaction of a company. There are good examples. Mark Williams company done something else. And is dead. And many other examples. If you can not stand critical args anymore the end is near.

Anyhow: the miscalc of xojo was the way they where developing 2020R1. Nobody, really nobody wants to pay for loss of functionality. And a slower compilatet result. Cause: my Benchmarks speaking all time trues. On Raspberry, on Mac and on Linux X86 there is a really slow result for 700 Bucks a year the target? No. The target should be: improvement of existing functionality, enhancement of the functionality and improvement of the IDE. Instead of doing this they where reinventing the IDE. If they would rewrite Web 1.0 to get the way to 2.0 and would for example placing functionality out from IDE to Addhandlers there would never be a problem. Bot they’ve done nothing like this.

Ending with the joke of renaming msgbox. Sorry. I have no Idea about programming. I do not know how to do it. Cause I have an entire new language in front of me.

I believe that this will not come to a good end while there is no reason for a good end. If you do a mixture between Pro developers and Citizen Developers you should do sorting. Like Pro has all the features, Standard has the citizen Futures and light has only a few standard features, a bit more than the ability for hello world.

The conditions for the market are clear. And yes, there is a market for citizen Developers which need also a way to build up their small apps for their needs.

But professional users needing more than xojo is deliverint at the moment.

The MVP program has never been about building a bridge between users and Xojo as advertised, but rather a buffer between them and the (shit)storm of criticism that has been flooding the forum and social media for years now. Geoff is probably already thinking again what the new name of his company should be (this is how they make old problems go away). Pretty sure that trick will not work again. And what do to with the pile of ‘swag’ they have laying around?

Hmmm. There is no chance to get rid of this in this wise. He has to front himself with exactly this circumstances of history. When diciding to get away functionality for me was clear that I have no chance to use it anymore. Even for the Devices which are builded up with internal monitor so they do not need a WebApp I deceded to develop with B4j TO HAVE THE SECURITY THAT MY CODE IS CONSISTENT AND REUSABLE. Sure I do nnot know what will be tomorrow. Nobody knows. But I know that - even if anywheresoftware will die I have my Software cause it is open Source. Because none of our devices has a connection to the scary internet there is no need for upgrading.

The stupid part is that development is even faster. And one device system we builded up with guacamole from Apache. The result: when I had to write IOS and Android App I could reuse nearly my entire codebase. Something I can not do with xojo. So my decision is ended if they do not move. My devices I can develop with other languages and there is no need for a King of a burning kingdom where we only have to pay his interests. Because it is a small company there is also the risk of bankruptcy what makes all licenses unusable. Anyhow there will - in this case - not be any rescue for the code you’ve written. In my opinion this is a hard case for everybody.

The decision of xojo to write citizen Software is something you can see, feel, smell and taste. So why waiting for another Part of it? When 2020Rx is ready (still with all the IDE errors) we will be in 2022 and still have to suffer. Why? Because. There is a small bunch of developers. When developing something like xojo you may have to develop much stuff in any edge of the Software. So it is impossible to fulfill all of it.

Xojo has problems with the citizen users because of this policy. The citizen users are doint for example mouse move actions over the internet an wondering that the server capabilities are falling down. For me it is impossible to see any change in this policy. Xojo would have to change entirely there product structure to get out of this because xojo was not realizing that there are professional developers witch realized that this functionalities are really dangerous over the internet but really nice to have. To have if better than to need a friend of mine always said. And for me this is true.

When developing in this kind of cycle you may find out that the work for professionals is done much faster and that it will be the base for the citizen Developers. For us it is not needed that we can click it with a contextual menu. It would be enough to have the ability to set it with add handler. Or in another wise however. Exactly there is the difference. Cause the pro developers do not care about automatism. The other way around, they are mostly annoying

So: Normans ban has exactly with this problem a fixed connection. Geoff and his “Stormtroupers” have no other chance than banning him cause he is bringing exactly this behavior in front: bringing out new releases for the public (most are citizen developers) and not working out solutions for professional developers. And the professional developers are getting the point fast: missing features without any explanation are stolen features. Who accepts a loss of 50% functionality? And at this moment Norman came cause they startet to do a barbecue with me and was helping with a can of gasoline on their fingers.

Instead of getting rid of stueker on all edges the discussion startet to be burning and burning. Without Norman, so they calsulate, I would be silent and go. But. Okay. I would have a message for them. Norman is strong and straight guy with an open and friendly character.

And at the moment he wrote as underlining to my post that I will change development from xojo away the lines of queen (another one bites the dust) he was overfilling their glasses. They detonated. Showed with 1000 years of BAN. And this BAN is the sign for me that there is a mental problem in their heads which is more than being a bit upset.

The solution: can only be done by xojo and not by other people. Within their Bug policy and Versioning their chances are low to get out of this. They had many chances but now the point is reached where the developers do not have any chance. Maybe xojo can exist with only citizen developers. I would not say no. Than the decision makes maybe sense. But only maybe.

Stupid part is that Discourse has 2 options

Xojo chose the prior then when I ask how I get a beta “well no one is allowed to break the rules and license type doesnt change that”
Sure. I get that. How do I get the beta that literally it says I get access to as part of my license ? (or is this just “marketing” as well ?_
Suspend tosses you right OUT

Oh Norman, u forgot to mention that as Pro you have bought business leads in the forum aswell, from which you are now banned.

Also ashamed by their decision of suspending someone just because they aren’t liking the person (especially twice).
At the very least, they’d have to tell which sentence broke which rule.
My sympathy to Norman.

Banned? 1000 years is not detention, it is expelled.

Do we count from after the first ban, or the second?

And should we fight a religious war over which is the right date?

The person who gets banned the most obviously is the winner.

But I’m open to fight a religious war. Damn I can’t even spell that word correctly.

And don’t get me started on the “flagging”. Are the “Hidden replies” by the very few special snowflakes I can’t stand to read or are those valid replies I want to read?

Hidden Replies though should, as far I understand, be ones from people who you have ignored
But if you’ve ignored them the I assume theres a reason
So maybe you do not want to read them ?

Nope, there is no difference between the guys I don’t want to read and posts following a flagged post. I saw this today in a post where Christian was flagged. And then a couple of follow up posts were hidden, too. The topic was about autodiscovery.