We were chatting on the INN discord and someone noticed that in the thread “Thanks for the last 11 years, Greg!” which was split and a post just happened to disapear.

Pretty sneaky!!! Here’s the post if you missed it. 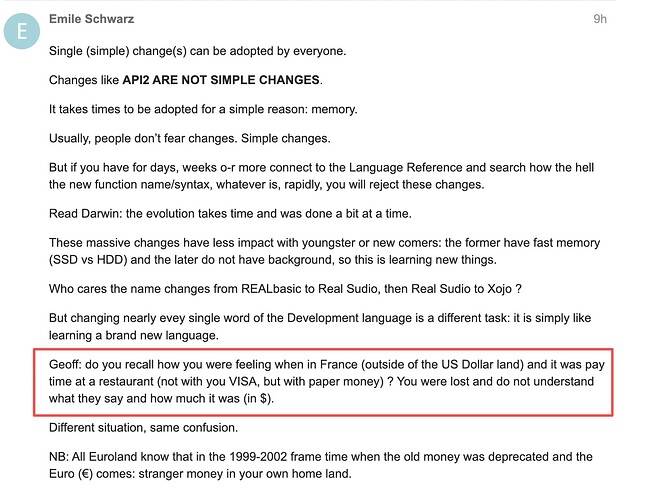 yes i read it, the comparaison is not very acurate, plus really is this post such a deal?
you are in a anti-geoff crusade lol ?

New tactic? Probably removed because it had nothing to do with the topic and didn’t follow some of the guidelines?

yes first thought that came to mind, it was offtopic, sometimes emile like’s to digress lol…

Emile’s posting is just in the new thread. The only thing Dana did was lock the thread and start a new one.

If you take a serious look, you will find Emile’s post.

I hope you are a little bit more careful in the future.

There are still professional developers who create amazing applications with Xojo. I regret your negative Xojo experience which I believe is genuine. However, my experiences with Xojo are positive despite I also experience problems from time to time.

dont folks get banned for that any more ?
or is it jUST me and a handful of others ?

I am glad I could be at help.

I use Xojo indeed for Desktop.

it’s just you and a handful others getting banned while we are arguing about and discussing about.

I neither digressed nor went off topic.

The topic was about programming and age.

I compared the massive change made by API2 to a visit to a foreign country where you don’t know the language or the currency (at all age, and especially when old).

And I do not talked about the shared codes and examples I’ve done these last days (publicly and privately).

Well, this confirms the good mentality of the authorities who believe themselves to be superior…

I am the benjamin of a 7 children family:

Of course, this band of merry thugs knows how to make friends.

See, the form of behavior to customers has not changed, it is strongly following their line. Working this way they are the ones telling what will be possible and not the customers say what has to be possible. Xojo is a Low Code Platform in my eyes and for that really okay. Not the best one but still.

People, the particular post was not removed as many think here. It is still there.

What I do not understand is that Dana locked the post to congratulate Greg. There was no reason to do so.

Also, those lifetime bans, I find a bad idea. I cannot understand that Xojo inc. does not understand it is negative for their Public Relations. But who am I?

Guess what: who we are?

Lifetime bans are problematic. Especially when there is no separation of powers, like prosecutor and judge being the same entity.

there is: in my Case was Antony the Prosecutor, the Judge and the executioner. So it was separated. Step by Step. And I guess other cases are not different.

And the best is: even if you are Pro User you can’t get testers versions because of the fact that you have no Access to the testers forum not even read only. So coming with the execution is also the exit of the testers channel which is part of the contract between the Pro users and Xojo, inc. Not to misunderstand: the contract is that you will have as a pro user the ability to test the Beta Versions. Xojo is not allowing that even if you tell them that it is part of the contract.

Means: they are breaking the contract and even if you renew after they still break the contract and do not allow what is your right. THAT is the REAL Situation. If it would not be history anyhow I would do a lawsuit against that behavior. Customer rights are counting for everybody also Xojo.

From what I read here, the more reason for Xojo to rethink its banning rules. It is correct that when buying a license, that person has the right to beta test the software. Being banned from a forum should not alter that right.

Banning for 1000 years is a lifetime. Anyway, the IfNotNil forum is a very democratic place, and discussions are civil and polite. I like to visit this forum.

I like this forum, too. We can discuss contentious topics without getting personal.

I’ve asked them to not Ban users since this means they cant log in and get access to the testers forum to download. Geoffs reply was (and this IS a direct quote)

Being suspended from the forum means exactly that. We don’t do partial suspensions.