Well this doesn’t suprise. For a long time they had unasked and unwanted Google Translator on their Doc pages together with a huge pile of 3rd party content. Just another bad developing style combined with illegal, shady practice, at least when done unasked and without consent.

My personal advice is to use Firefox with uBlock Origin and strict blocking settings as you can see in following screenshot. And of course in not using such products at all. For myslf I’ve switched from Xojo to Python and Open Source Dev Tools in general, eliminating everything what is closed source crap. 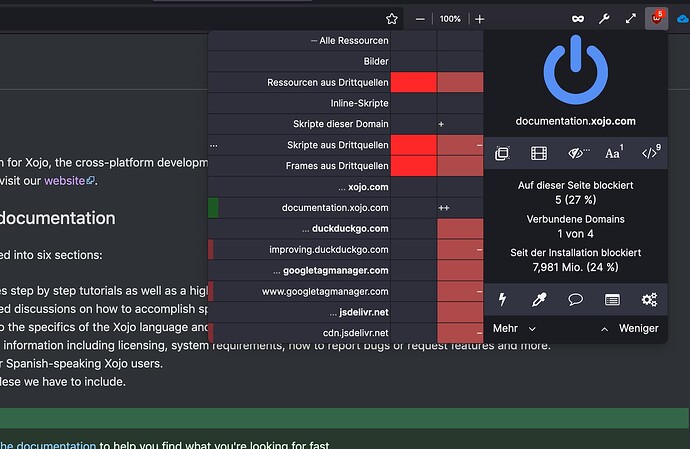 Not even in us you are allowed to behave so without consent.

If you’ve got an old Raspi lying around somewhere, you can install https://pi-hole.net on it and not only block trackers but remove their calls completely, so it has a nice impact on your bandwidth too.

So they can say what is going on and why. End of Discussion.

So Geoff has been reduced to using shady techniques to enchance the revenue stream?

Nobody but Google makes money from Google Analytics. It’s just for marketing people to have some idea what people are clicking on.

they couldn’t do that without google analytics ?

I happened to notice these trackers when I used the documentation.
Even after I installed the local docs

Surprised the hell out of me

I think it’s just that GA is pretty much standard. Web admins love including it. I personally see it as nothing more than a curiosity. Like, I browse Google Search Console and can see search terms coming into my sites, but it’s not like I’m really going to do anything with that information. GA is in the same boat for me. It’s info, but it’s not info I need because what am I really going to do with it? It’s just a curiosity, so I don’t use GA. Or any trackers of any kind.

On the web is one thing, from the local docs is quite another IMO.

It’s just for marketing people to have some idea what people are clicking on.

But that does not say why they clicked there… I wasted too many hours on the documentation yesterday to find back the code snipped I used in a project because I have troubles with it.

There was no meaning in that: the pages were not popular or not, they only do not have the information I needed.

The documentation display and navigation have to be improved. Some part of it must be proof-readed by a technical guy (accuracy) and a newbie (understandability / what is missing)…

On the TOF, a guy used UPDATE (in SQLIte) instead of INSERT… go figure ! Probably because he do not found INSERT in the documentation (and UPDATE may work fine for him)…

New docs is a new product. They need time to optimize that. Like all time a new product isn’t ready for production but it is in a wide beta. That is the price for the rapid release model. And many people wanted this for faster features. So a soup to eat for the ones wanted to get newer features faster.

I find the news docs to be a giant step backwards

They know it, they were told by many people during testing that it has major design flaws, and needs serious reconsideration before release.

It is unfortunate that user feedback was ignored.

They know it, they were told by many people during testing that it has major design flaws, and needs serious reconsideration before release.

Then I can#t understand why they released when their Beta testers said it is not okay to release. Seems they are not interested in the feedbacks of the testers group or they WANT to ignore it for faster release.

Before release ?
They’re out and in use already

Yeah, in the testers forum (before release) many problems were pointed out with the “new” documentation that made it into the shipping release. I urged Xojo to work on it more before shipping it…

Seems they are not interested in the feedbacks of the testers group or they WANT to ignore it for faster release.

I am not going to speculate their reasons, but I will say that it didn’t help Xojo’s reputation among long time users, who’re pretty fed up with being ignored and continuing to face changes which make it harder to use newer versions of Xojo.

Xojo already faces a reputational problem in the development tool space, in that no-one knows about it. The kind of customers who can help elevate it’s standing, are/have walked away.

If Xojo had put their attention on making more capable, reliable, faster and smaller apps, we’d poke up with the IDE quirks and there would be no need for this forum.

I am very saddened by Xojo of recent years, I do hope that they can reflect on the decisions they made that created all of this negativity, and make amends.

I am very saddened by Xojo of recent years, I do hope that they can reflect on the decisions they made that created all of this negativity, and make amends.

I get the feeling they either feel that they don’t own it and are not responsible for it, or think it comes from a market segment that is not profitable enough for them or that they have no chance to capture, or all of the above to some degree.