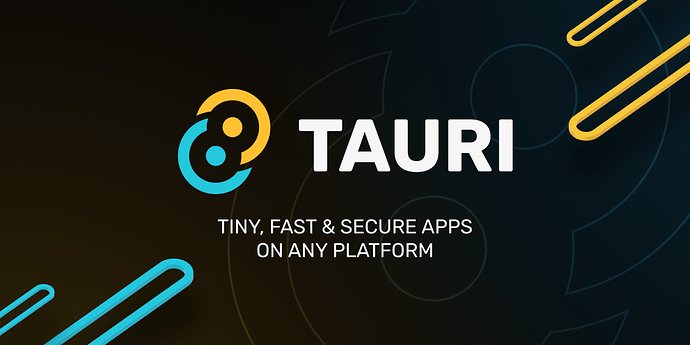 Tauri is a framework for building tiny, blazing fast binaries for all major desktop platforms. Developers can integrate any front-end framework that compiles to HTML, JS and CSS for building their user interface.

My dev stack just changed!, we will use it, along with Xojo, Xojo desktop is great, no matter what some people here say…

and with the promising yew framework, tauri apps shoud be cool

A framework for creating reliable and efficient web applications.

My dev stack just changed!, we will use it, along with Xojo, Xojo desktop is great, no matter what some people here say…

Xojo desktop (at least API 1) is decent but still has still has too many rough edges to be great, and IMO there is less emphasis on minimizing x-platfrom differences (for the type of things were it is doable) than there once was.

And OMG is it fast when compiled !

If Rust had decent UI bindings I’d consider it

That’s my main malfunction; it’s a systems language and I suspect it will only ever be secondarily anything else. There are dozens of languages I could learn but I already know a half dozen plus several sub-dialects of some of those, and several of those (e.g., C#, JavaScript) are mainstream so I am loathe to learn another half dozen just so I know what all the cool kids are talking 'bout. I would rather use my limited time to learn a new toolchain or maybe framework and leverage what I already know.

A compromise might be, say, Java because it’s not that different from any other C family language. If I were retired and playing at making command line utilities that were performance-intensive, sure I’d consider Rust. I’d also consider C. IDK … at this point in my life I just like getting things done for clients, without totally reinventing my knowledge base every 3 years.

I write Firmware in Rust for ESP32 and other Rtos driven MCU. That is the right place for this language. All UI stuffs…not the world for Rust.

10000% percent agreed with EVERY last sentiment

at this point in my life I just like getting things done for clients, without totally reinventing my knowledge base every 3 years.

I found The Wails Project a few weeks ago. Similar setup except it uses Go. Version 2 but it still has some significant drawbacks with the UI still. Can’t have multiple windows was the biggest and there was something else that I can’t recall at the moment.

I was pretty excited about it since my current employer has invested significant money in Go training. But the limitations were a disappointment. But still, it would work for some applications. Hopefully it will continue to be developed and become a viable UI application development system. I like Go. The language is relatively simple, it’s fast (debatable if faster than Rust), big community, and really, really good at concurrency.

Following to our benchmarks rust is a bit faster. But respect to go. Blazing faster than xojo

One of our talented Xojo developers took one of his Xojo apps and on the first pass Go was 20 times faster than Xojo. He did some major optimization on the Xojo app and was able to shrink the difference down to about 10 but that was a LOT of work and not very sustainable for a big project.

And let’s face it. At some point it’s not the app that’s the bottleneck it’s the DB, network access, and file IO. Xojo can’t hold a candle to Go’s concurrency model.

don’t forget totally optimized c++ or C is a bit faster (may be 2x) then go. Java is a bit slower than C++ and C but in java optimized Database connections and data handling java is in parts 10 times faster. But … GO is really good. no question. And it is much better than Xojo will ever be in questions of performance

On what type of hardware the tests where performed?

On our site on MacBook pro Intel i7 16gb, on Mac mini M18 16gb, on PC windows and thread ripper 32gb ram. The results are the same on all isses and hardware platforms. Small differences but nothing what comes near to a milestone for xojo

Intel MacBook most likely but I don’t know what the spec’s were. Keep in mind that this Xojo developer was a former Xojo employee (from many years ago) so he really knows how to dig deep for Xojo performance. I personally would not have done that much work to see if I could get Xojo anywhere close to go performance. I’m also not clear on exactly what type of app it was and if he was only comparing a method performance or overall app.

this Xojo developer was a former Xojo employee (from many years ago) so he really knows how to dig deep for Xojo performance.

Now you got me curious about who it is … I sometimes wonder where all those talented and helpful people wound up!

I’d rather not say in public. If you PM me I’ll give you the list of all the former Xojo employees and consultants I work with.

You’ll have to excuse me as I haven’t done much research into other tools, except Xcode.

The Electron paradigm is kinda offputting, you use HTML/CSS/JS for the UI and a bridge object written in C. Is that the same with Rust and Go, or are they the languages used for the bridge object?

I just can’t get over the idea of using HTML/CSS/JS for a desktop app UI (I’ve done it in the past), but still, have a block with this.