Thanks for the last 11 years, Greg!

After working with us for 11 years, Xojo Engineer Greg O’Lone has decided to move into a different field and industry. We have all really enjoyed working with Greg and wish him well in his new endeavor. We have posted a job ad and we are looking for...

I saw the job posted on Facebook and came here to share the good news that they are adding staff…. Nope! I guess not. Nevermind.

Well, not the first time someone’s left Xojo and not the last, I’m sure. They’ll muddle along as always. All while saying ‘staffing is adequate’.

They’ll muddle along as always. All while saying ‘staffing is adequate’.

ByeBye Greg. Hello Feature of Web 2.0…will cost a bit of more time to do the needed fixes cause they need an engineer to do it. Wow. Hard.
Hope for him that he has a good position for a long time!

A new engineer will almost certainly be highly focused on Web, which is a good thing. I considered it might be time for me to apply, given that the three people that forced me out have now departed, but honestly, I don’t want to be working on web and I’m likely too expensive for them now.

They’ll muddle along as always.

They should put that in their advertising.

ll almost certainly be highly focused on Web, which is a good thing. I considered it might be time for me to apply, given that the three people that forced me out have now departed, but honestly, I don’t want to be working on web and I’m likely too expensive for them now.

That’s sad for the Xojo community and good for your mental health!

I applaud Greg for jumping ship before it sinks completely

I don’t believe that it will sink. As long as there are enough new users and enough citizen developers on Board they will have enough people paying for the Software and they will not sink. Why should they? The entire Point is: you can’t be everybody’s darling. Citizens want to have a broad band of possible platforms. It is given. Pro’s wants to have absolute reliable Software with less Bugs. Not given. Customer Structure: Citizen Devs. The Pro’s: ha there is a problem. But that means not, that Xojo can not exist for the next 1000 years. At least until our ban is ending it should be so that they can exist. I mean: we will write in the forum after.

They should put that in their advertising.

Too hard to find stock photography. So it might require effort.

Citizens want to have a broad band of possible platforms. It is given. Pro’s wants to have absolute reliable Software with less Bugs.

Umm Citizen Developers want reliable software too… and actually need it more than pro’s in some ways. We can not deal with finding workarounds as well as pro’s can…

And Citizen developers, (which are not the same thing has pure hobbyists) don’t want to look foolish to coworkers nor give the IT department ammunition to say " All coding should be left to the IT department for the good of the business" if an app misbehaves (never mind bringing up maintainability, no one has ever heard of Xojo etc ) …

Xojo was my favorite job, and I would love to work on it again. But I’m not what they need right now. They need a web developer. I can be that, but I really don’t want to be. Web development sucks today thanks to small screens.

I can’t deny, I want to be working on Xojo again. At the Atlanta conference I said I’d still be with Xojo even if money was no object. That hasn’t changed. But it’s just not the right fit right now.

Why don’t you join and bring xojo into wright direction. Not only your development skills but you can change the attitude of xojo ceo and team.

It’s sad to see Greg leave. I’d have wished they hired the replacement 6 months ago to let them work side by side. It takes a while to get familiar with the frameworks.

Beside all the comments on this forum, Xojo seems to sell well as far as I see on the plugin sales.

And @thommcgrath, you can still throw your hat in the ring as Xojo Inc. could need some more developers in my opinion. And you may need less training to get to work compared to a newbie, even if you may not do web as primary role.

and so the drain of expertise continues…

As they said it takes at least 6 months for a new dev to get up to speed, we don’t have to expect many bug fixes or new features to the Web 2.0 framework for a couple of releases. Not that there was an abundance of them before, but still. 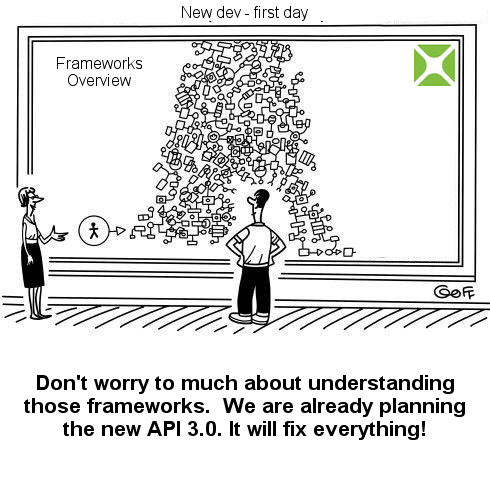