Color me surprised this morning

The business is not falling down. Their model is another one. Our model is professional development. Their model is citizen developer low code platform. That’s the end of all Stories. It is not a platform for web like vaadin or for mobile like codenameone or for desktop like java swing. They have their own thinking about all that stuff. And that’s not our thinking. They believe that their way is the way for the product. We have to accept. That’s the end. Changing away from it is the only chance.

What is acceptable at society level is not necessarily identical to what law defines. Law tends to follow developments, not leading them.

Which is exactly the difference between soft power (good will, ethics, decency, honour) and hard power, so your “argument” is off the mark.

And when something like that happens, there are usually quick(!) patch releases. This happens very rarely with Xojo. 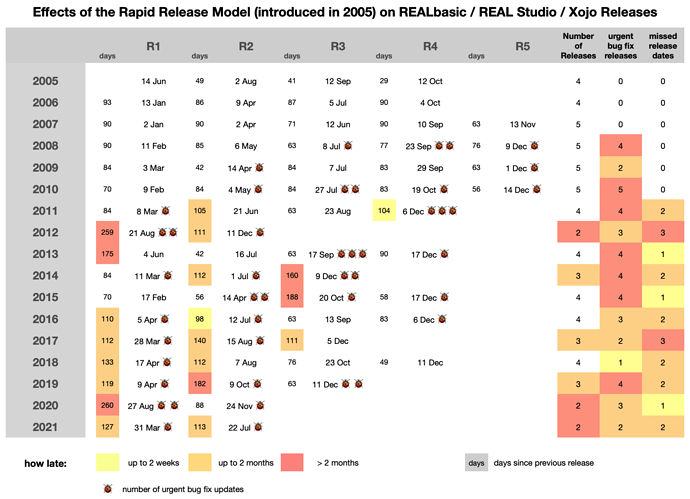 RR has, as you suspected it might, turned Xojo into perpetual beta

Convincing management that its worth a try is THE hard part
So far unsuccessful
Maybe in a few years they’ll have a great idea to do bug fix only releases followed by feature only releases.

I do not think that Xojo appeals to low coders, like Filemaker devs. It simply takes too much time to navigate between all the errors and omissions in the documentation and the IDE. FM low coders with no other experience in programming will likely throw the towel.

By all means, this forum should also be about Java and other multi-platform tools!

I would appreciate it, no question. And I would take care of it also where needed.

I do not think that Xojo appeals to low coders, like Filemaker devs.

I would call Xojo medium code… but it may be trying morph onto low code… That si teh only reason I can think of they would think the Api 2 RadioGroup control could replace regular RadioButtons.

IMO the hall mark of low code products is being able to to certain things very quickly, at the expense of flexibility…

To me a good amount of flexibility is important…

BTW Many years ago when i worked for a major corporation and was involved in an automation project, the corporate engineer involved (don’t recall his speciality) thought of the software part as primarily gluing different packages together …

Not something I or the other chemist involved agreed with!

low code, medium code, whatever code have one thing in common: it should have no critical bugs and definitely no show stoppers

Some CEO may object: “I do not have resources to achieve that !”

That is how senior management sets priorities. The strongest motivation for change comes form sales figures.

The low code market is full of offerings from many vendors. Xojo would be lost there, given the little resources they have. It is the gap between ‘high’ code and low code, with the special appeal of being multi-platform, where Xojo could play it’s strengths.
Making amendments that facilitate low coders moving to Xojo is great. But this cannot and should not be done at the detriment of what professional coders need.
Before making such amendments at language level, I’d suggest getting the documentation straight. The shortcomings of the documentation contribute to a sketchy onboarding experience.

Not sure its a fair comparison, paid for product vs free (java etc) however millions? where are the extra Xojo devs they must be raking it in?
In the UK you can look up the accounts for any limited company. Is that possible in the states? should be able to work out roughly how may renewals they get each year from that.

Saw this, I think it was posted from Xojo Xojo Adds General Improvements To Cross-Platform Software Development Environment

Xojo, Inc., the company that has enabled over 425,000 developers to build native cross-platform applications, today announced the availability of Xojo 2021 Release 2.

From the current about page: Xojo: About Xojo, Inc.

And granted most apps created will be non-commercial, still, barely a 100 apps in their showcase.

All this is just commercial talk. Doesn’t mean it holds a shred of truth.

I would count as 1 user, but I had probably 20 licenses over the years

I’m sure others are similar

Their Pro user group is about 800
I think everyone who holds pro license is added there almost without exception
They tell us these lists are maintained automatically so as people buy / expire they should, in theory, be added & removed. (ITS JUST A THEORY)

All this is just commercial talk. Doesn’t mean it holds a shred of truth.