Color me surprised this morning

I know Michael meant well, but this made me giggle anyway.

Going from thousands of active users to millions overnight seems a bit of a stretch. Sascha seemed as surprised as I was.

Anyway, it looks like Xojo would be playing with the big boys now (according to ZDNet 2019):

P.S. I just thought this was funny, so no need to overreact to this post.

recent posts (here and TOF) seem in imply that Xojo “may” have sold as many as 400,000 licenses over the years. Far from a Million. And doubtful that more than 10% (my opinion) has been active in the last few years. And I believe those are annual license, NOT customers. For example I bought a license every year for 13 years, before I abandoned Xojo in 2019

Millions ? not. even. close.

are these 400K paid licences ?
then as xojo may be used freely, they can have many more users.

400K licenses accumulated over 25 years <> number of active users. It is a number that says absolutely nothing. If it did, the Nokia 1100 would still be the most used phone today. Like in Dave’s example (and many like him), he, as a single user, is counted 13 times but is by no means still a user. Low activity on TOF (of which almost one third of their users use according to their latest survey) and lack of interaction on social media suggests the number of active users being way lower.

Not being able to build with their free version doesn’t make it a tool widely used by anyone serious about programming. Finding someone who has actually even heard of Xojo is quite a challenge, so no, they can’t be put on the same page as Python or Java users.

Hence why it was funny, nothing more.

That sounds like one of Ken McKenzie’s Preposterous Tales

If you have struggled in Xojo for years with the conversion of data into regional (non-US) formats, or if you have ever encountered the limits of mathematical calculations in Xojo, then it can quickly happen that 100,000 becomes a larger number out of the blue.

Disclaimer: I find that funny too, and there’s no reason to overreact either

This has made me laugh. No offence to anyone intended but whilst millions of Xojo users would increase Xojo Inc’s revenue I doubt it would mean more staff or more fixed bugs.

I disagree, they would probably invest a bit in extending the marketing department

This is possible! I didn’t think of non developers!

Well, when I quoted the numbers from their press releases in my article they said I made it all up …

Millions ? not. even. close.

but that doesn’t relate to 7300 new customers in that period of time.

Yup. Also some invoices are for multiple licences. And of course it’s a mix of new licences and renewals, maybe even other purchases (conferences, video material, …).
It’s just some numbers which we can’t interpret correctly, but still I think they show that it’s far from millions. More somewhere in the (up to ten) thousands.

yes # of customers / users ≠ number of invoices
A customer like jotter might have many many invoices over the years but is one, or maybe a few, users
I’m sure I have had 20+ licenses but I am just one user

… but it gives an upper limit on it: can’t be more, likely a lot less (potentially even ALL renewals, 0 new customers).

… of course jotter is now on very thin ice …

… and expect invoice numbers to jump by millions

Anothe clue is the number of persons on TOF…

Not many (declared) newbies all along the years.

I do not talk about flags (Pro or Tester) because it is just a matter of price, a newbie can buy a Pro or Pro+ license (an can be a tester even if no test are ever done by the licensee)…

All we have are clues, no fact(s).

But millions… the guy was dreaming !

Interesting. So, I checked my order history and found their “order #” history to be very linear between 2008 and 2020 (see chart below), at an average of 4396 orders/year. Which lines up with your numbers. Extrapolating the data shows today’s order number should be around 137000-138000. Anyone with a current order # can confirm if this is on track. Also, if you backtrace this to 0, then it lines up close to their 25-year history.

As mentioned, these orders represent a multitude of things (new licenses, renewals, conferences, accessories, apparell, etc.). And any license order could be for multiple licenses. In fact, in order for the “400K” number to be real, each order would have to be for 4 licenses on average. Which I seriously doubt. 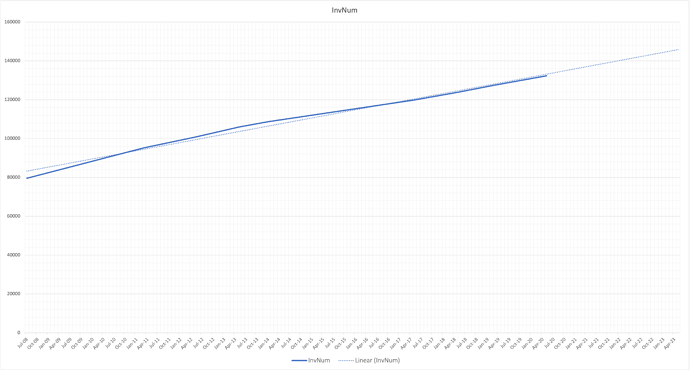