Again discussions on TOF are blocked by Company 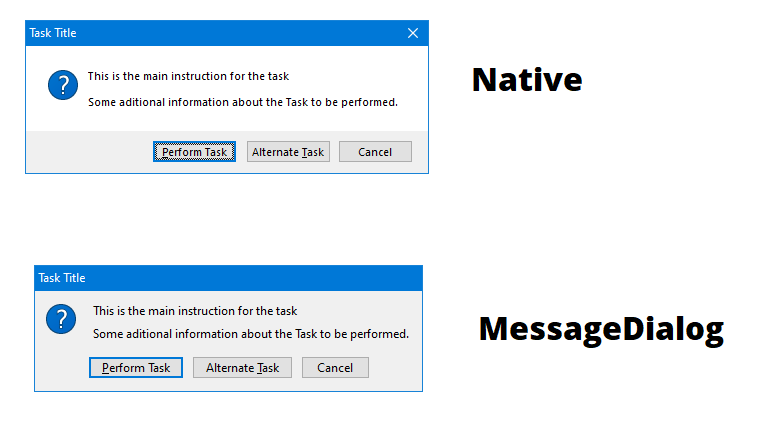 The Benefits of Native Apps?

And today arrived the Xojo May 2021 Newsletter featuring a Xojos blog post called The Benefits of Native Apps Quoting that post “Xojo creates native apps and uses the native user interface toolkit on each platform.”, But, that is a LIE, at least on...

Normally I should not need to say anything about. It is a new incident which provoked that: the Newsletter Mai 2021 and their Native BlaBlaBla. And again they stop the Discussion about it like always. I guess the writer has a good chance to get banned from tof if he will not stop writing in this wise.

It is ridiculous in my eyes to behave so and I strongly believe that that has nothing to do with “wining” what many people on TOF told about critics like this. It is about LIES and LIES is not something to live with. A professional Software Company should be able to speak trues about their native or not native behavior. To look like the original or even only a bit like the original is definitely not native. Not at all. Not on MAC (yes it’s different to native sorry we checked it) and for sure not on Windows and not on Linux. So: where is xojo really native? Nowhere!

I understand thorsten, but if the email I received from xojo is anything to go by there is no one listening to their bollox:- 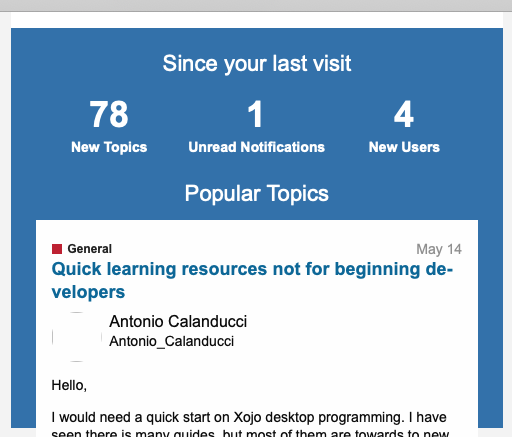 that’s a week activity report, 4 new users, 0 of whom I suspect have any real programming understanding of any sort (opinion not any way for me to check)

this is what is REALLY says

Baned? Maybe, but I JUST DID WHAT DANA SAID in that other post:

“encourage others to add the Feedback Cases you care about to their Top Cases list”.

My post did not include any rule violation it was closed by pure “you cant talk about Xojo being dishonest in its marketing”.

Anyway, what was unexpected is that the post was the one with most views for almost all day. Maybe the CLOSED icon draw atention and the Xojo censorship made the thread more popular

Also I notice that the average views for the day are around 100, and in this forum, even with less posts, those have almost the same amount of views…

To be totally fair, that blog post is over a month old (Apr 5). And when it came out it was announced in TOF and immediately drew some reactions because it clearly was a homeboy blog - as in “Xojo’s MacOS implementation gives you Native look - forget about the other platforms because I don’t use them and I don’t care they are half-baked native and I am MVP so I know more than you.”

I was surprised that you brought it back since you reacted on the original topic back a month ago. Maybe you thought you got a new notification of a new blog post, but it wasn’t new. So it really was a duplicate of what was discussed a month ago - not really value added to bring it back up yet again - not to worry though I am sure there will be other opportunities

My post did not include any rule violation it was closed by pure “you cant talk about Xojo being dishonest in its marketing”.

Anyway, what was unexpected is that the post was the one with most views for almost all day. Maybe the CLOSED icon draw atention and the Xojo censorship made the thread more popular

Also I notice that the average views for the day are around 100, and in this forum, even with less posts, those have almost the same amount of views…

I have a question: is it a rule violöation when you explain what is going wrong and telling them that this kind of behavior is not professional and that - under that circumstances - it will cost you extremely money cause you can not use the software you have written because it is not maintained while the functionality is not there? It is not. Do it often enough and you will have soon your last day in xojo Forum. While the Fanboys getting nerved from confrontation with the trues and they don’t want to read that. So they decided that it is the better way that critics are out of their forum. That’s why Norman got banned, why I got banned. Even Markus Winter was not doing anything else than that ant guess what: he got banned for two weeks. To educate him what they don’t want to have.

So I guess you may have an answer for it. And yes: when nothing helps ranting is needed. But I always was speaking trues in all rants I have done and no rant was harming others in which wise you ever think they could harm others.

It harm Xojo image. And I do not talk about pointing where it hurt.

I think now everyone knows this will do no change at all from Xojo. Maybe, I say maybe it is time to go ahead and think differently (a.k.a. stop ranting).

It is just that ranting is bad for stomach (and feeling).

Oh, I am sorry: it makes nothing to MY stomach. And the ranting is needed. If there will be no resistance in the group of customers they will never change if they ever change. And maybe, maybe I will say: I would immediately stop ranting if they would start to follow a professional concept or if they would point out that they are not interested on deeply professional use. Only maybe.

And maybe I am different to you meaning that with speaking about the issues there is at least a bit of a chance that something will move on to a solution of that. To many people are relying on xojo, to many people have that kind of problems and many, many of them do not want to criticize xojo company WHILE THEY DO NOT WANT TO GET BANNED FROM FORUM.

So maybe, a little maybe I will not stop my behavior cause this is a free world and a democratic world where we have the freedom of speech. The Constitution grants me that right in article 19: Everyone has the right to freedom of opinion and expression; this right includes freedom to hold opinions without interference and to seek, receive and impart information and ideas through any media and regardless of frontiers.

I thought you stopped whining and moved on:

When the lights finally go out at Xojo

Well, good luck to you then! </troll>

edit : they should say hi to elon for me though

Oh yes, you thought…I stopped wining long time ago. And if you would realize what I am writing you would get that it has nothing to to with wining but with clean arguments and with a strategy behind: I will not leave the place to people like you which want to turn the reality. You should think about it: it makes no sense to do what you try to do while it will not stop the process xojo is in. There is the point of interest. Only if you were not getting: I am not the programmer of xojo. I was changing away with the Software in production environment cause it is nothing to use professional. So: you should look for that what is described in your own interests. It will not help to troll here.

One day, they eventually advertised about a new forum for Xojo (or was it still named RealStudio?); then, later, they announced the NUG would close, and it did happen.
Several users complained and wanted to make an alternative NUG to avoid the forum, a thing they hated; some actually foreseen that the forum could be more easily controlled than the mailing list (obvious).
Was so true…

Several users complained and wanted to make an alternative NUG to avoid the forum, a thing they hated; some actually foreseen that the forum could be more easily controlled than the mailing list (obvious).

They will get away with all their behaviour and focus more on new users instead of long time supporters which do not like the current changes. At least, that’s how it feels like.
We should stop even trying to change them and move on. I did. I just use Xojo for quick&dirty stuff (for my personal use) and 1 huuuughe project at work.

We should stop even trying to change them

I’m still using Xojo (client projects)
I file bug reports and then try to figure out how to work around the issue.
Sometimes I can. Sometimes I cant.
Either way I keep moving.

Thats the problem is it not, a lot of us have some large projects that would cost too much time and money to rewrite in something else, so you are basically stuck with Xojo.

We took the step, and it actually wasn’t that bad. The time we kept loosing writing workarounds in Xojo, or having to basically rewrite huge parts to fit their latest framework change stupidities was easily made up by the new stable tool where bugs are virtually non-existent. Our app was very modular and existed out of a dozen separate exes so we could change them one by one. And we are extremely happy we did.