Advice on a possible laptop "upgrade"

If someone could give me his or her’s opinion on this it would be greatly appreciated:

Right now I’m using a mid 2012 MBP 2.5Ghz i5 with 16GB of ram as my work machine. I’m currently thinking about upgrading to a 13" 2015 MBP i5 with 8GB of ram that came my way at a reasonable price. Personally I don’t want to upgrade (or can afford to do so) to anything newer than a 2015, I like the fact that the 2015 models still have all the ports available.

Do you guys think I would benefit from this upgrade?

If I would go for one then it would be the 2015 15in 2.5 GHz model with the dedicated graphics card.

Thanks for your input!

A 5 years old machine ? No more spare parts for repair…

RAM: 8GB? That is what I have and I am always missing some RAM. With 16GB, I am quite sure you never have that trouble.

For the ports, use a hub. I have one and it do not bother me…

Btw you really should download MacTracker - it is free and has all the info on Macs and Mac accessoires (you can also get it in the App store). Belongs on every Mac.

Need to correct my first statement as the 2015 update was a bit more substantial but I still say no.

Single core performance is comparable to your 2012 MBP, multi core is about 40% slower.

The 8GB of ram is the main reason I had been pondering if this is really an upgrade or a downgrade.

I guess I’ll just wait until I save some money for an upgrade that is really worth it.

It has some extra ports too, plus the retina display wich I’ve read can bee a problem in some of the early 2015s. Oh and it runs a bit faster, 2.7 vs 2.5 GHZ wich I would probably won’t even notice.

As for RAM - my 2010 17in 2.53 GHz i5 MBP upgraded to 8 GB and a 1 TB SSD running MacOS 10.12 Sierra never felt slow - and I usually had about 20 large apps (like Xojo, Word, Excel, Keynote, Preview, Safari, VMware Fusion with Win7, GraphicConverter, OmniGraffle, Skype, TeamViewer, Handbrake, etc) and over 360 webpages open. Best laptop I ever had … sadly died 2 months ago …

No. The CPU has a higher frequency, that doesn’t mean it’s a faster computer.

I believe I’ll keep my 2012 untill I can actually make a real upgrade.

Thanks for the advice!

After the advice I received last night I decided I’ll wait until I can afford a modern 15" or 16". I’ll have time to figure out how to connect that thing to the cinema display. I think I got the video part figured out, losing the power connector from the display to the laptop would be a bummer and I have not been able to figure that out yet.

This is how I connect the MBP to the cinema display. I love the ports on this laptop. 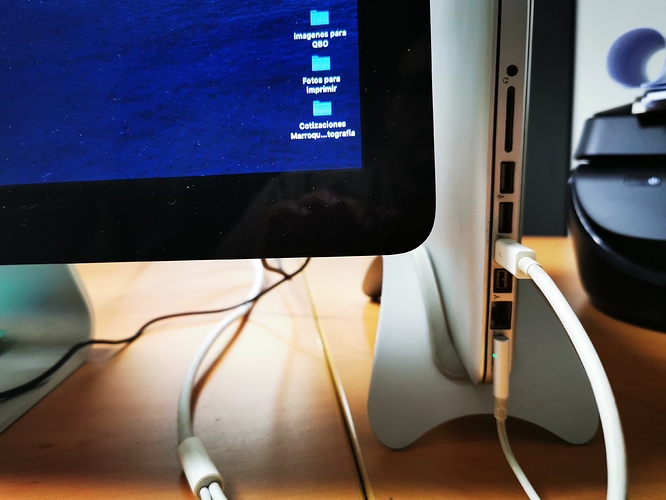 instead of laptop, have you considered Mac mini? very reasonably cost to do main dev on.

the way I have gone with my computing is a deconstructive model. Meaning, my core machines exist in my network rack. Any laptop device, raspberry pi, or intel nuc, chromebook can RDP / VNC to the core machines. Once connected, I cannot tell that I am in an RDP / VNC session. Then if I travel, I can vpn back to connect from my travel device

This way, any device that I use is nothing more than a thin client without the high processor / ram requirements which saves on the overall cost.

I have an old macbook mini which I like very much but as @npalardy mentions I like the mobility of a laptop.

I do most of my work in my home office but I still need to be at least a couple of hours in the “real” office three times a week.

You are right, time marches on…