Dave, Norman, Thorsten, and now Hal with the other guy being before my time.

If that other guy was Brad H, then it was a totally different situation and his behavior totally justified it IMO.

@MarkusWinter : why do you engage with the Xojo people again and again? Arguing with them is futile. Really.

Because, like all of us, he speeded much time for development and has Customers rely on his Software written with Xojo. Or needs it internally. So if you need to have a working Xojo and the fundamental Rules of Software Release Cycles for Programming languages are not accepted by the vendor your Language is coming from you may run into a problem. And somewhen there comes the day you are not accepting that anymore. That is the moment you start a process to try to get rid of the problems. There are three Phases of Xojo exit: Phase One: you are upset and try to find a Solution with the other users in Userforum but accept that there is non. Phase two: you get more upset and you start to fight against windmills to have at the end no success. Phase three: you start to leave the silent way and Xojo bans you after a time and to much effort answering your posts and taking care. Following to the other ones which are banned it is exactly so. 1000 years! Yey!

At one time many of them (including some who have been banned) were enthusiastic boosters of RB/Xojo and some were contributors of some of the most significant open source Xojo code to the community… It would make sense for Xojo inc do some self...

If the title actually read “debt” instead of “dept” I think they would have removed it.

I did saw the title changed to "Xojo is technical debt just to be “dept” again hours later.

Maybe my imagination or maybe admins wanting a fool title

It changes only the wording but not the facts.

When I told a colleague about this topic over the phone, he first searched TOF for ‘Xojo is technical death’, which may say something about how people start to think more and more when they hear ‘Xojo’…

Anyone else being pursued by the Sheriff Tony Cyphers? I had posts deleted, editions, and even a post from someone in a thread that I started marked as solution instead of me doing it. Dana argued me PM in a “strike one” tone because I said that publicly to him (and obviously I got those posts deleted too). I’m getting fed up of his behavior while he quests his MVP golden stars made of paper.

The best way for Xojo to silence their critics is by being awesome.
The next best way is for them to be competent.
Failing both of those, being honest would go a long way.

Anthony has been like this since he became an MVP.

I saw your posts… 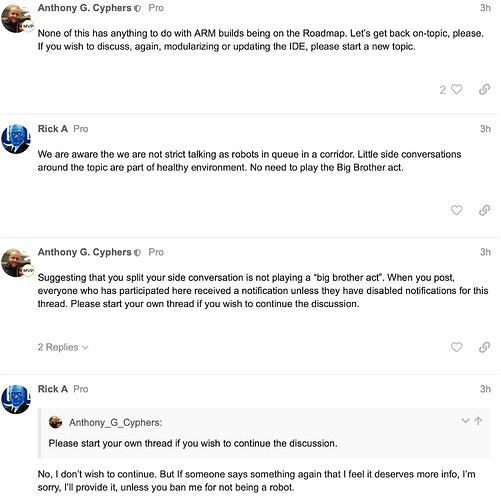 @horse is right… but since Xojo is failing all those categories, the only thing left is to delete/censor anyone who doesn’t drink the Xojo Kool-Aid

It’s sad. Cross platform on the desktop was their USP but they
neglected it, chasing rainbows. I can see the tempation but it was
a mistake. There is and will be for a long time, an opportunity for
desktop applications, particularly when everyone else is looking elsewhere.

This will all backfire on Anthony one day.

When he ran the discord chat he was quite normal and had issues/complained. But as soon as he became an MVP he uses his new power to cement his bond with Xojo.

People remember. And eventually he’ll be upset one day and might have to ban himself.

It already does. Due to his behaviour I had decided not to buy his plug-ins.

Trust me you are not alone

That many of the people here used to be supporters, if not outright boosters, of Xojo and have become disillusioned with them says a lot
Karens post the other day was spot on

Well, postings get flagged, moderators are notified.
Anthony is a frequent visitor and sees those more often than others.

Maybe Xojo Inc. should let people know when their posts get a lot of flags.
We may all be surprised about the numbers.

Sorry Christian, editing other people’s posts is an absolute no-no.

Anthony has gone waaay overboard with his “moderating” - that isn’t “moderating” anymore, that is outright censorship.

The phrase “drunk with power” comes to mind.

And just because someone disagrees with you and flags your post does not mean your post should be removed.

P.S. What’s the saying? “Just because billions of flies eat shit doesn’t mean I should too.”