The devil you know

I’m 90% sure I’ll move ahead with Xojo on the deskop at least. Are there better options? Maybe. Probably. But they’d have to be significantly and obviously better as I’d have to navigate a new platform, workflow, and maybe even language. The idea of using Elements Compiler held my attention for awhile. It’s about the same price as Xojo ($799 a year). And I programmed in Pascal in the early to mid-90’s (and VB is an option too). The B4X is something I’ll continue to follow but the same issues apply, there are too many unknown unknowns. Xojo may not be perfect, and maybe I’ll come to regret my decision, but i feel like there are more known knowns and even known unknowns. I’m choosing the devil i know.

As for web and mobile. i don’t have any immediate plans. I’ve made a couple Xojo 1.0 sites that were fairly basic and did the job. One is still being used by a former employer last I heard. I’ll cross that bridge when i get to it, but i’ve got a fairly good python background now so that’s always an option.

Does anyone know if the Desktop license also includes the version control formal?

Desktop I believe does
https://www.xojo.com/store/#prettyPhoto/0/

I agree with you about the desktop. I’m trying to investigate/test the other offerings (mostly B4X and LiveCode) because I have mobile and web goals on the horizon for some projects. I’ve been able to delay those for a while, but eventually they’re going to be a must-have, and I don’t have confidence in Xojo to deliver on those platforms.

If another platform proves capable of delivering on all platforms with at least the same productivity of Xojo on desktop, then it’s a no brainer. But I fear I’ll be forced to do as others have and use different systems for different platforms.

Yes, the idea of using the same code across all platforms is hard to resist. Although the current Xojo IDE requires you to import all that shared code into each project. Not ideal but a devil that I know, so to speak. Norman has suggested a universal project which would make it very seductive. Obviously, I’d love for the web and mobile to be tenable options. Maybe 2021 is the year we see Xojo make some strides in that direction. I’m just not going to plan anything around that possibility.

Although the current Xojo IDE requires you to import all that shared code into each project.

Huh??? Can you elaborate?

Or maybe just clarify. It isn’t true if you’re doing xplat on the desktop. But if you want to make a webapp using the same code you’ll need to import those classes, modules, and event code.

The same is true of all platform targets you want to use that code in
HOW you import it could be any one of several ways
Actually import it so you have the source in each target (multiples copies blech !)
External items work for some things
SVN externals or git sub repositories

What is Technical Support “Normal” ?

When I was pro, I never get anything (link/url for example) about that.

What is Technical Support “Normal” ?

Norm does not run a post apocalyptic bike delivery service!

(Who knows what I am talking about? )

Who knows what I am talking about? )

I’m out too. Clearly not the Hitchhiker’s Guide, my main source of culture. Just reminded me of last year’s Youtube episode where Jay Leno is driving a Tesla Cybertruck together with Elon Musk, who brags about the bulletproof glass because he “wants to be leader in post-apocalypse technology”.
I hope that’s not a joke ageing very badly.
(Off-Topic mode off)

Dark Angel is an American television series created by James Cameron and Charles H. Eglee. The series premiered in the United States on the Fox network on October 3, 2000. Max Guevara, portrayed by Jessica Alba, is the protagonist of the series. The first season had an additional seven regular characters. Two of these characters, Kendra Maibaum and Herbal Thought, did not return for the second season, and a third main character, Colonel Donald Michael Lydecker, was written out of the show shortly... 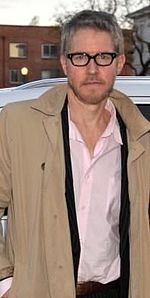 Reagan “Normal” Ronald runs the Jam Pony Express courier service and is nicknamed Normal because his conservative attitude clashes with his somewhat anarchic surroundings. He is a hard taskmaster, often annoyingly saying “Bip, bip, bip!” to mean “hurry!” In addition to being disliked by most of his workers, he becomes anti-transgenic in the second season after the existence of Manticore’s creations becomes public. Normal dotes on Alec and calls him his “golden boy,” unaware that he is a transgenic. In the series finale, he skillfully helps an X-5 deliver her baby and later completely changes his opinion on transgenics.

Normal is described in “Before the Dawn”, when Max begins working at Jam Pony.[10] Normal makes an appearance in “After the Dark” when Max visits Jam Pony. Max is pleasantly surprised at Normal’s change in attitude, when he shows compassion for both her and O.C.[11]

That show also had Micheal Weatherly, who went on to play Dinozo on NCIS