I have a simple table… no scrolling, no sections, am using it as a “menu”
When the user taps on a row, it calls another view based on the row selected.
HOWEVER… it doesnt always return the correct row number

the delegate activates the next view… that isn’t the problem, the problem is indexPath is wrong
but not always

it works for a while, then returns the LAST row #, then starts working again

very odd… I found a “workaround”
the UITableView was the “exact” size of the devices safearea, each row was 1/8 the safeare height
Scrolling was disabled.

I found it I made it a few pixels short, it worked much better.
but decided to change it to 8 UIButtons instead… since it was a small finite number of objects.

Now the Menu works fine, and other things are messed up. 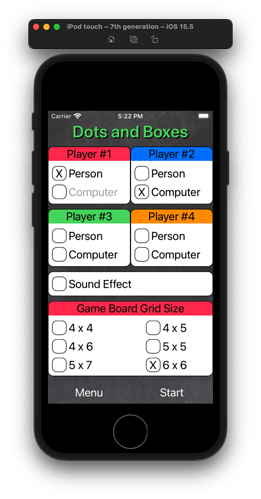 HOWEVER, if I click one of the buttons, it THINKS I clicked the SegCtrl

I even removed all the targets… and clicking one of the boxes still flashes the SegCtrl!

THIS ALL WORKED THIS MORNING… .Arrrrrgh!

Seems this is on ANY UIButton not just the checkbox class

… so Gremlins is the answer

I am beginning to this so… Touch ANY UIButton, and the SegmentedControl goes off instead
If I remove the SegCtrl, then the UIButtons work as specified

view… that isn’t the problem, the problem is indexPath is wrong
but not always

it works for a while, then returns the LAST row #, then starts working again

you think he needed the Mogway after midnight?

Not sure if this was the reason or not… But I trashed the entire DERIVED DATA folder, and rebooted everything… Today the simulator seems to behave as expected