One of the features that Xojo has is a Modal MsgBox/MessageDialog, that provides information to the user and waits for a response. The standard UIAlertViewController in Swift is what is “normally” used for this function, but requires a lot of code to set up the buttons, the action events etc. But one of the things I didn’t like was if you had more that two buttons, it STACKED them. My class leaves them Horizontal

In addtion, there is an INPUTBOX version with a single TextField

I will not be posting all the code for this class as it exceeds 740+ lines. And while this is a lot of code, you just add the class to a project and forget about it. 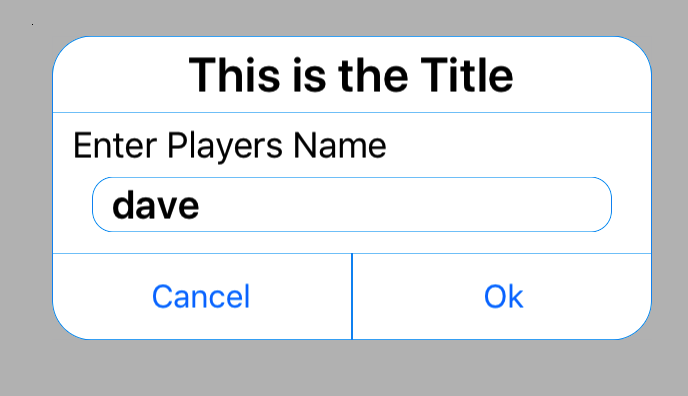 In addition to .buttons there is .custom that allows up to 3 buttons with captions of the developers choosing.

Nice one. Is the full code downloadable somewhere?

send me your email address…

I’ll put together a demo program as well…

Note : this (as all controls I write) is 100% Swift code… NO INTERFACE BUILDER!

Thanks. I’ll send a pm when I have a bit more time.

I posted a link to the code already