OK so who would like to use SVG in desktop apps ?
There are some things that obviously wont work from SVG (like animation) in a conventional Xojo desktop app as things would probably land in a canvas

There are some interesting developments on the horizon so … YAY !!!

The plugin is literally days old at this point so theres a fair amount of work yet to do but … its coming along !

Hmmm… What about converting Object2Ds to SVG?

Object 2ds get a long way there
But this is going the other way
Reading an svg file and actually rendering it
So much depends not JUST on XML handling but proper interpretation of the drawing commands, clipping paths etc
And thats where what exists today for dealing with SVG in Xojo isnt up to the task
What I’ve tried with ones that exist doesnt clip properly ( and thats was just the first issue I found)

But, so far, this plugin IS and makes some decently complex SVG images possible as it is lightning fast

That “animation” in the movie is, at EVERY slide of the slider, reloading and reinterpreting the SVG rotating it and then giving me an image to draw in a canvas paint event.
Hugely inefficient code but it was literally just a quick hack and it flies

SVG is the solution for a DOSE, Draw Once Show Everywhere (I made it up right now

That’s the Web interface design option for resolution independent, looking good, presentation (+ the compressed WOFF2 for some icons as subsets of fonts)

Bitmaps are not great for creating interfaces, because they differs from screen to screen, usually getting blurry, and increasing immensely the size of the application needing different sets of bitmaps.

Most UIs probably will migrate to lightweight vector options at some point, and for features like animations, they will be compiled to some intermediate optimized format in memory. As we used to handle in the Adobe Flash era.

Bitmaps for interfaces are most for backgrounds needing pictures. 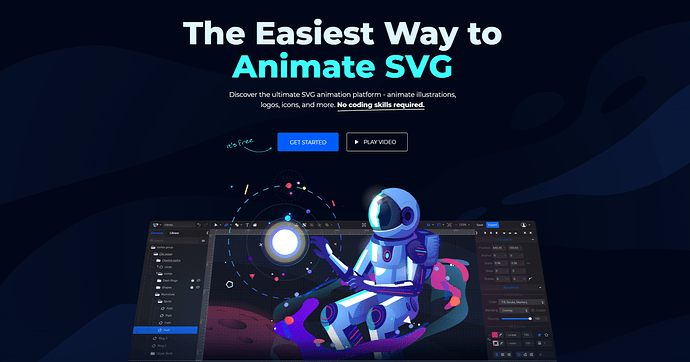 It's SVG animation made easy - Create impressive SVG animations online, without any coding skills. Add them easily to your website. Get started for free!

This had more to do with using SVG inside a Xojo desktop app - not a web one - as one more image source (like JPG, PNG, PDF, TIFF) which today isnt really viable with Xojo

using SVG inside a Xojo desktop app - not a web one

Part of such technologies will tend to converge. SVG and glyphs tends to be used as UI parts of all interfaces, Web, Mobile and Desktop.

THAT is the point of the post I made above
Focus !

Can I use it to build UIs ?

// rotate the image by some angle around ANY point we want in the image
// we chose the middle of the image for simplicity
m_svg.Rotate(sliderRotation.value, m_svg.Width/2, m_svg.height/2)

// convert the scaled SVG image to a raster we can draw in Xojo
Var p as picture = m_svg.ToPicture(g.width * scale, g.height * scale)

question … in your updated demo (impressive BTW)… why does the rotation change when you change scale? they should be independent

EDIT : yup
Rotation is cumulative so on every draw it would rotate by that amount again and again
Moving the code into the sliders change event works much better (edit see SVG for Xojo? - #12 by npalardy)

OH I forgot the BEST part
I’m told the plugin should work on macOS, Windows, Linux and iOS (dunno about Android)