below is the results I get… 1st is Swift , 2nd is Xojo (both are same if only one number)

This is the Xojo Code

This is the Swift Code

I couldn’t tell if this was this a question? Was it why is your value different?

If so, the 80 is probably the height of the dock, in swift the origin might be bottom left?

That is what I begin thinking as well

which means the Swift AvailableHeight should be

That works for the MAIN screen where the dock/menubar are, but not for the other screens
Swift says the TOP for Screen #1 is 215, but Xojo says it is 145
there is no menu/dock so the height is 100% (1080px), so inverted coor or not, it doesn’t match 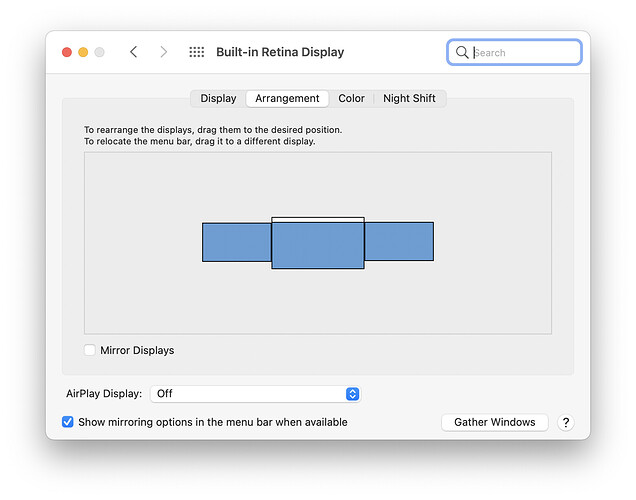 And the white bit at the top of the middle screen depicts what? the menu?

yes (I assume you don’t have a mac then?)

I do but its in another room collecting dust and it takes about 10 minutes to get going and that fine detail on an os I dont use often doesnt stick in my brain, just tweaking a vm a mo to give me multiple monitors.

The height of the menu can be worked out with Apple Developer Documentation so you don’t have to guess the height of the dock, which can be calculated from the remainder.

Side note, you can actually see the vertical offset difference between the two outside monitors on that screenshot you posted, one is ever so slightly at a different height than the other. This is reflected in the numbers you posted at the start, one screen is 215 and the other is 205 up from the 0.

assuming your observations are correct, then the values Xojo is reporting would be “wrong” then

Unless you align the bottoms or the tops for your tests it will be a pain to check the numbers, I’ll dig out my laptop later and set up a second screen on it and run some tests after figuring out how to install and run swift.

The question is… is Swift right? is Xojo right? Does Swift need some alterations to the function to get the “right” answer. Apple has really vague and incomplete information with ZERO examples

qt reacts like swift and not like Xojo. Could be an argument for Swift / Apple and not Xojo to be right.

is there a simple QT script I could try without any 3rd part installs?

Just looking at your screen 1 numbers:

Xojo is just reporting the values based on 0,0 being in the top left of screen0. The numbers are fine, they are just from different locations.

So to get the xojo numbers from swift do

left to right makes sense, and matchs Xojo, it was top that was the “issue”