I have 6 RegEx statements… that all “kinda” work

The problem is, all 6 of these rules are applied to a block of text in the order above …
the idea being numbers would get an attribute, but then if those numbers are inside of QUOTE they would become a string , and lastly if a comment marker was found, the rest of the line would be colored as a comment regardless of the rest

…
But the String and Comment rules are not working

Note : the \ are doubled as a Swift requirement (escaped) ,

these “seem” to do the right thing

TEST is a test keyword, which should be blue when NOT in a string or comment

the entire first line should be PURPLE including the word TEST
the entire 2nd line should be RED , comment is not going to EOL
same with 3rd line comments are either // or ’
on the 4th line, the 1234 and test should be orange and blue, except for the ones following the // those should be red

but the quoted string rule is messed up

I think the $ should come at the end of the search pattern (if at all).

looks like I found a quoted string pattern… no idea where I came up with the one above.

Ah, my bad. I tested it in Kem’s RegExRX and there it matched the quoted string with the $ at the end…

my app crashes unless they are in ( regex )

had to modify the string one (unless you want to permit newline and carriage returns in a string ?) 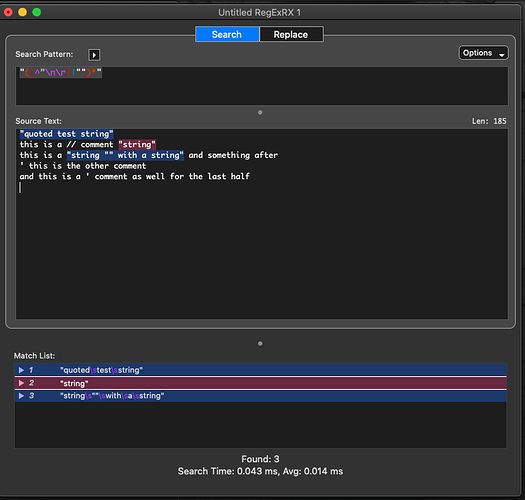 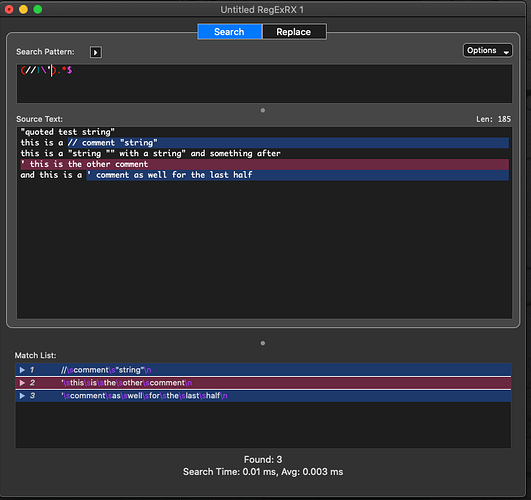