[OT] Is it serious doctor?

I found that in the Release Notes for Xojo 2022r2:

The example projects have been reorganized and some renamed to make it easier to find an example the user may be looking for.

Is it serious doctor?

No, this obsession with changing the names of all things is pathological!

Let me guess, they did not use symbolic links to preserve the old structure? That’s then pathological indeed. Like supermarket leaders rearranging everything and wondering about sales dropping

Like supermarket leaders rearranging everything and wondering about sales dropping

Well, speaking as one with retail experience, the thinking behind rearranging stores is that, over time, regular customers just stop seeing the stuff they weren’t specifically looking for. The idea is that the other stuff might now catch their eyes. But yes, that thinking (whatever you make of it) has no place here.

Like supermarket leaders rearranging everything and wondering about sales dropping

That thing actually increase sales. And that rearranging have an actual reason, as Jerry said, that increase customers time on the store and make them look other items.

But the framework & language ?
That kills familiarity

that probably depends on the country./culture There is a reason why Walmart, Tesco, Intermarché and many others completely failed on German soil. Here you will be out of business in no time, if you make noticeable changes, w/o a good explanation (new owner is one of the rare ones). So, pretty close to Xojo’s challenges

There is a reason why Walmart,

A long running joke here in the States is that Walmart dress code is basically “pajamas.” I’m guessing that wouldn’t fly over there either.

what didn’t fly over here was that Walmart tried to forbid that 2 employees can fall in love (together), but that wasn’t the only reason, there were many. Retail is very special in Germany.

Are you sure its that sophisticated ?
peopleofwalmart.com might disagree

So now there is
Example Projects > API > PDF

The first covers JUST the shell object
The second then has additional subfolders for iO, Linux, macOS, Raspberry Pi, and Windows

How would anyone know to look in both places ?
Why arent they all in one place like
Example Projects > Topics > PDF
with all PDF examples in there ?

“many places” is good. Increases the chances to find “something”.

When I search something in the Example project, I simply Cmd-F, search on that folder (Examples), then I read what is found.

So the organization of the examples…

But, I always find a missing information:

an index of the examples and what we can learn in them.

But this is just my opinion, and no one never asked me about it.

Well, speaking as one with retail experience, the thinking behind rearranging stores is that, over time, regular customers just stop seeing the stuff they weren’t specifically looking for. The idea is that the other stuff might now catch their eyes.

My supermarket couldn’t stop rearranging stuff. It became so annoying and frustrating that I stopped going there and now go to the one across the way where they leave stuff where I know where to find it. You can’t “fool” me into buying something new when I want to buy something else just by shoving it in my face.

You can’t “fool” me into buying something new when I want to buy something else just by shoving it in my face.

My retailing experience was with photo equipment, not groceries. Yes, when I go to the supermarket, I’m a hunter-gatherer who wants to get in and out–i.e, I’m a guy. In any case, I don’t necessarily concur with the practice, from the standpoint of customer service. As Spock said, “I do not ‘approve’–I ‘understand’.” Name the episode.

Well, speaking as one with retail experience,

You better believe it! And I was also involved in the buying decisions for what went on those shelves.

You better believe it

Ah - Old School Ikea! I thought it was excellent that at IKEA under the old owner Ingvar Kamprad EVERYONE had to work one day a week at the bottom (stacking shelves, packaging, tills, etc). Pity that he died and his sons are nowhere near his class …

True story: friend of mine is a big animal at IKEA. He once visited Ingvar (then in his 80s and a billionaire) at his home and found him in his garden, harvesting his potatoes. As potatoes are quite cheap (10 kg could be bought for €5 back then) he asked: “Why are you growing potatoes???”. To which Ingvar exclaimed: “DO YOU HAVE ANY IDEA WHAT POTATOES COST!?” … and not because he was stingy, but because he never forgot where he came from.

Well, my career in my “former life” was equal parts photo equipment retailing, and being a working photographer/videographer. These days I write code at home, and go out to run a steam locomotive for a theme park

Edit: I too value “remembering where you came from” in a manager, and always aimed for that when I was the manager.

go out to run a steam locomotive for a theme park

Wouldn’t happen to be Tweetsie Railroad? 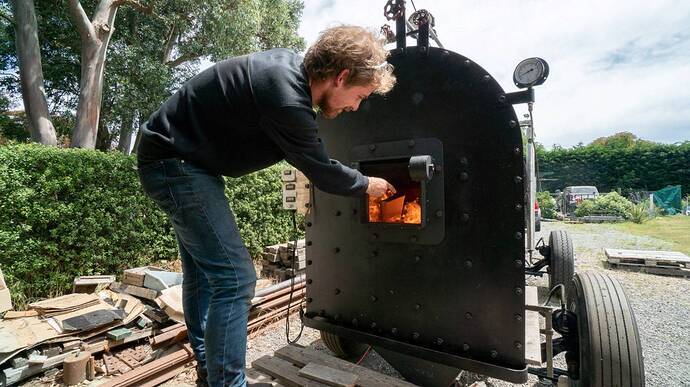 Steam trains, sure. How about steam tractors?

Just note that it would be Carbon Neutral, not Zero Carbon (journalism in NZ is quite amateurish, especially on Stuff)