No Patches, No Cry?

After yesterday’s exchange of blows was watered down again following the logic of the Dunning-Kruger effect (“I can’t see any problem at all”), we want to readjust it again.

I take the following current article as an example. On the one hand, because it is good, and some might learn something new: 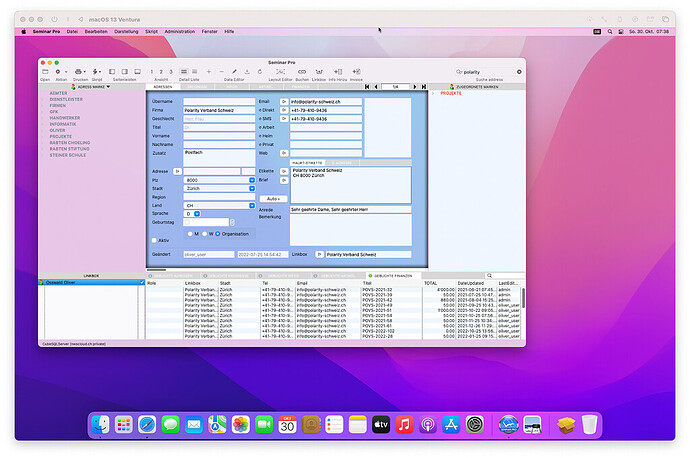 I did virtualize macOS Ventura with UTM on my 2020 Macbook Air, which runs macOS 12.6 Monterey Steps: Download UTM https://mac.getutm.app Download ipsw installer file for your Mac https://ipsw.me Run UTM and install macOS Ventura from the...

But the most important thing are the following sentences: 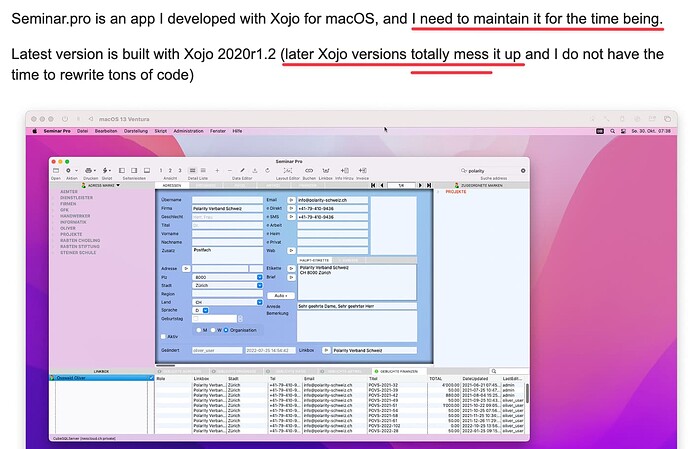 Luckily the old version is still running, but it is again only a question of time, until that might cause issues too. The root causes of many of such problems are the current release model of Xojo, which they don’t want to change apparently.

An LTS model would help on mitigating many risks and having to completely revise and test our code with each and every new release.

The implementation of a LTS Release Model would be simple.

Luckily the old version is still running, but it is again only a question of time, until that might cause issues too. The root causes of many of such problems are the current release model of Xojo, which they don’t want to change apparently.

An LTS model would help on mitigating many risks and having to completely revise and test our code with each and every new release.

And it would be simple for Xojo. Just make the last Release to an LTS Release. That stays for three or four years, better five as LTS.

Make the testers Release were all implementations coming up to the Release and improve it over the time until the next time reimplementing or implementing new functionality. So you have a Version for secure Production of the professionals and also a Version with all the new functionalities. And yes, if something there goes wrong everybody will live with working with the previous one. But nobody has to suffer from one moment to the other the complete change.

Then, in the last year, freeze also the Development Version and improve it to be serial ready. Testers now can test that version and get bugs out of it. Even public testing is then a good Idea. Collect the bugs, improve. After that year: you have a new Long term Support version. And everybody knows what it can and what it can not do. If I would have a year of time I could have rewritten in Xojo Web 2.0. So: it is a long time range. No functional changes happens anymore and the next production release comes automatically for the LTS. On the Development branch you do the same like last time again for four y<ears.

Customers are allowed to download the maintained LTS and the normal Releases. So you are in a more wide Testing area and can improve faster than before. And: with the LTS Version you have an improved product for all.

Since 2020, Microsoft releases a new major version of .NET every November now. Even major release #s are LTS, odd #d releases are not. I don’t recall how long the LTS is for. I agree that a minimum of 3 is good, 4 or even 5 is better. Companies need to know that a technology stack version is good for a known period of time, then it’s easy to budget for migration.

esp if, as when I was still in bog corp it, it took nearly 3 years to plan verify and qualify the machines software etc

It can be a HUGE undertaking to move thousands of users servers, desktops, laptops, etc

I don’t remember how many nodejs tutorials I watched, but almost all of them started with

"you have to install nodejs, please use the LTS version. The release number of the LTS version might be higher when you are watching this tutorial, so does the standard version, which most likely will be even higher.

But PLEASE do install the LATEST LTS version, you won’t need anything else."

All industry Standard technology Stacks having today Long term versions and an so provide a reliable platform with a high graduated Bug fixing. To get a company out of the possibility of LTS for the customers sets it to a low usability for professional Software Development. I can’t even understand how companies can do that.

Also with Web 1 and Web 2 we could have two web project versions in the 2022 Version. That could be the long term version. Modernizing Web 1.0 in case of security and reloading the Javascript frameworks to have the most secure technology would also help. But: it is not what Xojo thinks is good for developers.

And it is so simple. Fast release model, testing on release and fast innovation circles and beside of that: spinning of the LTS Version. And yes, people could then work with the best short term version or they could work with the lots version.

More to do for Xojo? No. Definitely not. More users? I guess within the next years yes. More Business: definitely. While even the LTS customer needs the Bugfixes and the new Versions.

Changing the Model to a maintenance pricing and a new version pricing: definitely affordable.

But always something could be so simple: the company finds a way to do it different.