Didn’t notice that, and it just bit me.

DesktopWindow and other new classes don’t exist in the old version.

I wasn’t using them. All API1 code. 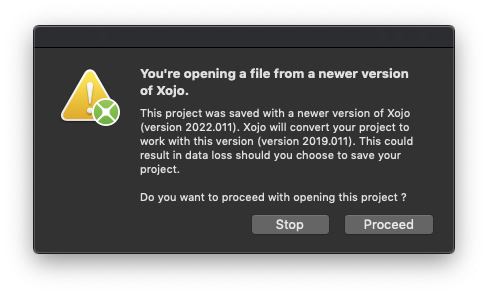 After clicking Proceed, the project loaded and is working correctly.

What is the problem that you are seeing?
Did you start the project with Xojo2021r3.1? If so, did you change all Desktop controls to non-desktop controls?

The project was created and started in 2018 R3

Problem was the minimum IDE version after stupidly saving from 2022 R3.1 as Dave suspected

the menus were also set to DesktopMenuItem

Find/Replace on the DesktopMenuItem, saving, then changing minimum IDE version solved my problem

[edit:] the Application also became DesktopApplication - I had reverted that too.

Weird that you ended up with DesktopMenuItem, in theory that only should happen if your App has super DestkopApplication, if the super is Application then Xojo should add MenuItem.

Glad you solved your problem.

My apology, the Application also became DesktopApplication - I had reverted that too.

Easiest way for me was to just drop and drag the program items over to an empty 2018 R3 project … but it is good to know how else I could do it.

and then everything renamed as “desktopXXXXX”

You might still need to edit the text file that is the project manifest (ends with .xojo_project) and change the first few lines to make it so the project opens flawless in o old version

as the first few lines
Edit those to say 2018.03 (in their respective forms) and you are good to go

Well, if you have the same amount of characters, you can safely replace them, even in binary. Just avoid removing “invisible” characters.

And did you noticed the Deprecated entries in the Properties pane (bottom) ?