I’ve been messing with .Net and MAUI and while its not perfect MS HAS shown a decent commitment over the past few years to make MAUI a ton better each release 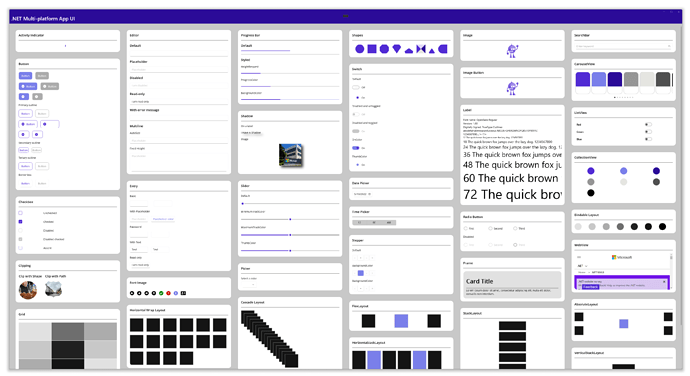 MAUI does look really interesting. As a Linux user and Linux first developer it’s unfortunate (for me) that Linux is ‘missing’ from the cross platform list (community support in progress).

Slowly but surely it looks better every release.

Lets hope the large component developers get of their asses an start deleiver soon too, this will be a winner then

Lets hope the large component developers get of their asses an start deleiver soon too, this will be a winner then

If there is $$ to be made you can expect some to wade into the waters.

yep, Syncfusion has some already, so later this year i think we will see much more of it

Huge improvements happening very quickly.
All my future apps will be in Blazor/Maui.
It’s difficult however to find help with real x-plat as .NET is still thought of as a Windows product.
Personally, however, I’ve had surprising success writing x-plat for Windows and MacOS. I can write once and compile for either platform. Only issue is that VS for MacOS (the IDE) is nowhere near as powerful as the Windows version, so I still use VS on Windows for code creation and debugging.
I’ve head though that Rider is a good alternative, but I haven’t tried it since I’m fine with a Windows IDE ATM.

Rider is a pretty good IDE - I preferred it to VS for Mac and have also used it on Linux to create cross platform desktop and web apps.

The one thing it was missing compared to Xojo was a visual designer.

VS on macOS is just Xamarin Studio with a new GUI and a few extra features.

I see they have a release now. Any thoughts on how close it really is to being ready for development? I’ve been spending time bug fixing/converting/porting my RB2012 code in Xojo. The more work I do, the more I realize that maybe Xojo isn’t going to be the tool for me in the future.

On MacOS its still not quite there

The macOS VS IDE has no visual designer for layouts

Its radically different, and quite a bit behind, the VS for Windows releases

The macOS VS IDE has no visual designer for layouts

In reality, most coders on wpf and now maui, just uses the visual designer for preview, and hand code the gui in xaml.

I would not expect this to be a high priority right now.

Oh, god I hate even talking about xaml

It is quite a leap from coding in Xojo, to master the multiplatform Maui…

yeah, you have to like that way of doing things. I dont, I like the way WinForms, Xojo, B4J and Delphi/Lazarus lets you design forms, much more clean than that yucky xaml

I use the Blazor flavour of Maui do the gui in html/css. (Yes you can do desktop as well as web apps). Just using razor/bootstrap currently.
I’d no idea how powerful and flexible these components are. Looking at eventually using something like Blazorize then tweak with css. Seemingly limitless. No more limits on what controls there are, how they look or how they work. And no xaml! Mind blown.

cool, blazor hybrid? I have been thinking of testing that out. Does regular blazor components for web work? If so, there are a LOT to choose from

The beautiful thing is there’s probably more controls done in HTML/CSS than any other language so you can pull from anywhere. On GUI I created to look as much as possilbe as the native hardware interface would be nearly impossible to create without HTML/CSS style controls.

Well, yesterday Installed the last version of VS and start coding a little app.

I was testing the app in the PC, clicked the target, selected the local device connected and test it.

Then I tested some more options in the android device, taking pictures, sending sms, GPS, etc. Everything is right there.

I use JetBrains Ryder, it is much better. Although I have so far only developed service code. I haven’t tried their visual designers.

Never could get my brain into VS Code for some reason.