I have been searching for a simple example literally all day, and can’t find anything

I need a simple Swift (ObjC if I must) example of how to “drag” from one part of the screen to another. All I can find is draggin files/photos etc from outside into an App.

Techinically I’m not really “moving” anything. When I do mousedown, I need to get the ID of the NSView I’m in, “drag” to another NSView and “drop” the ID.

Think of the Xojo Toolbox… you “pick up” a control, and drop it on the design canvas. Same idea.

Anyone know of any examples I can work from…

Its interesting to see how powerful Swift is, but how much Xojo has enscapsulated.

and you get quite a few, eg

Markus… trust me I have done that… 100’s and 100’s of times…
The results are for dragging files from Finder, Photos from Finder, dragging between apps, and 100% of them require the embedded use of Interface Builder.

FYI… NSVIEW is a Swift macOS construct… the example you pointed to was UIKit (ie. iOS… and macOS has a vastly different paradigm from iOS for a lot of things (unfortunately)

The results are for dragging files from Finder, Photos from Finder, dragging between apps, and 100% of them require the embedded use of Interface Builder.

Forgive me if you’ve already seen this one, but this article seems to deal with drag/drop of controls within an app as well as from an outside source, (my guess is there’s not much difference). 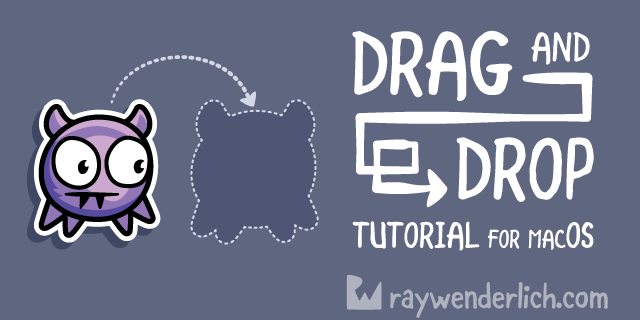 Drag and Drop Tutorial for macOS

The drag-and-drop mechanism has always been an integral part of Macs. Learn how to adopt it in your apps with this drag and drop tutorial for macOS.

Thanks… I have a huge problem with RayWenderlich tutorials.

but so far this seems to be where I have to start.

Perhaps I can take that demo, and rip out all the glitter (and IB stuff)

FYI… that demo is no longer supported (written in Swift 3)
SOooooo… I have to figure how to update it, without yet understanding how it works

not to mention it have places where code was left out…

This doesnt help at all ?
https://developer.apple.com/documentation/appkit/drag_and_drop?language=objc

I try to avoid Apple’s docs as much as possible… They provide zero context. So you don’t know where to put things…

And everyone else posts “snippets” of code, again totally out of context… SO you need to know the solution in order to implement the solution.

So far I have spent TWO full days on something that SHOULD be easy-peasy, and probably will be if I can figure it out.

Unfortunately all I can say is “I totally agree”

Ok… have a partial solution (FINALLY)… the cursor changes, and it picks up the string I want and delivers it to the correct object…
It uses the UIImage of the NSView as the drag item!

In the SOURCE View (in my case an NSVIEW)

zText! contains the string I want to pass (its different in each instance of the NSVIew

In the DESTINATION (here its a NSSCrollView [for now])