Hopefully someone can provide some insight

So let me see if I can explain this clearly enough.
I have created an Attribute Inspector in Swift (similar to the one in the Xojo IDE).
This consists of

The NSTableCellView has various controls (textfield, segCtrl, etc). If you have downloaded the proof of concept of “my replacement” you know what I mean

There are TWO instances of this control currently in the app. One on the main IDE screen… and it works just fine

The other is in a different window and will be used to collect project config info, and there in lies the problem. On that window all the controls “work” EXCEPT for textfields… If I click 3 or 4 times, the text highlights (but in GRAY), and it won’t allow any typing. Segment controls are also gray, but do allow selection.

I have compared all relavant attributes between how the instances are created in both windows, and am at a loss as to why one works and the other doesn’t.

Note : All delegates are local to the Attribute Inspector class, so the parent window doesn’t need to know about the controls inside.

Like I said. I don’t expect a “solution”… but perhaps someone can make a SWAG that might help?

this is what I get (note the gray) 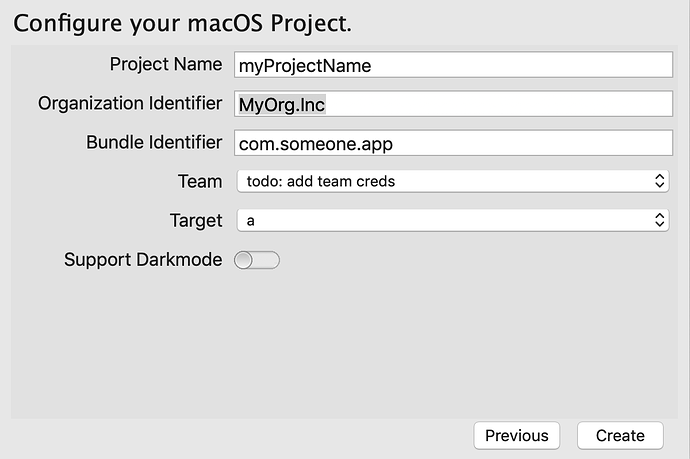 almost like the view is readonly OR is not the keyboard focused control - macOS API’s have a name for that I cant recall off the top of my head … keyView or something ?

same as I was thinking… but I can’t figure what it might be… the two windows that have this control are of a similar construction… in the one that works (you’ve seen it), there are 3 NSViews side by side, with the right one enclosing the Inspector.

In the one above, there are also 3 NSView, but only one at a time is visible (think page panel). I have even removed all but the one pane, with same results.

do the views becomeFirstResponder maybe ?
dunno if you need to specifically do that in the way you’re using them ?

When I ran it and clicked on the text field… it said GOT then LOST. so I thought “Aha!”
but then I went to the one that worked… and it said the same thing, but didn’t seem to have lost focus…(as in it still worked)

yeah… that is about where I am at… is WTF

so somehow the non-working instance seems to think the field is Read-Only, but unlike iOS I can’t find a UserInteraction flag to check

even though both instance are created the same

well it seems the issue isn’t (probably) with the Inspector control itself, I removed all the controls from the window, and inserts a plain vanilla textfield… and it doesn’t work either, even though it reports as selectable, editable and enabled

Turns out (and I do not know why)… but setting the WIndow Mask to .fullSizeContentView turns the whole window (and its contents) to “read only”

I created a simple test window with just a single TextField… and it worked if I used any other mask, but did not work if I made it fullsizecontent