The full JRE or just the pieces used by your program? That’s one difference. Last time I checked, JRE was a huge monolithic thing.

The 1-Click B4J Packager result is about 50MB in size, which is in the range of a Xojo App. It includes only what is used, next to an .exe 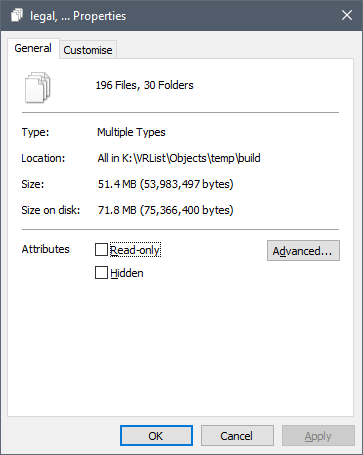 About the B4J Mac packages, I’ve just created one as an example. https://www.b4x.com/b4j/files/MacAngryBirdsExample.zip (35mb) You can run it by unzipping the package and clicking on run.command. As I previously wrote there is place for improvement here and this is not the case with Windows packages (which are simpler to create and include an executable). [image] Creating it is done with: Run the project locally (on Windows) to generate the compiled jar. It will be in the Objects folder. …

Just click and run, or will see a JRE install at first run? If so, it evolved. JRE was a mess in the past (As DotNet).

No install at all.

Neither does Xojo IMO. Back in the days when it could make a single .exe, they could. Now, not only your code is compiled but you need a whole bunch of external .dlls to make it work on Windows. I consider this ‘their’ runtime.
Not at all
This is MS C runtimes as of late
And you have always with MS app had options about how to deply
Put DLL’s next to the EXE (got check out an office install) or install them

No install at all.

That’s great. Now my argument against Java is just hating the language.

If so, it evolved

Indeed. There a quite some misconceptions about java.

But God, I loved it!

Now my argument against Java is just hating the language.

And with B4X, that one can go in the bin too as its language is a VB-like one just as Xojos!

Good arguments. But I intend to follow the trends with large companies backing the tool sets.

Agreed, was just pointing out misconceptions, not trying to convince you. B4X is indeed a tool in the range of Xojo, not an industry standard. So let’s go back to topic ‘Flutter’ before they lock this topic and we’ll be banned… Oh right! This doesn’t happen here!

The 2 might as well be written by diifferent companies (I think that might be the case - pretty sure VS for Mac was written by Xamarin). They are nothing like each other and VS for Windows is a completely different beast.

But God, I loved it!

I intend to follow the trends with large companies backing the tool sets.

What about that article from a former Google insider that shows how Google often breaks stuff and has an almost “planned obsolescence” mentality (referenced here)? Could the same fate befall Flutter? Or is it more isolated like Android? And since Google isn’t producing this as a revenue source, isn’t it much more likely that they’ll either abandon it or just completely hose it someday?

I can’t afford to commit a lot of resources to learning/using a development system that could just “disappear” one day (note that I include Xojo in this category now, which is why I’m continuing to evaluate other options).

Could the same fate befall Flutter? Or is it more isolated like Android?

Like android? What are you talking about, andoid IS changing A LOT and to have a decent app, you have to be up to date with the changes, I think Flutter will be no exception.

isn’t it much more likely that they’ll either abandon it or just completely hose it someday?

I heard from a bird that Google is patiently advancing a powerful OS that parts of it powers Google IOT devices right now. And that Dart is a first citizen language for it and Flutter does its GUI… For years now. The commitment of the pair Flutter/Dart is massive now, many large organizations depends on them, including Google. A 100+ engineers effort. Years. Large corporations, even Banks, like the Brazilian NU Bank is using it. So, no, Flutter/Dart are here for a long journey

I forgot to mention what @scottc remembered, it’s on GitHub. If a meteor cleans Google from the map, the continuity is guaranteed by the community.