I thought I’d present a few Xojo based projects here that I worked on in the past years. Some are finished, but most are not. I keep wanting to release some of them as products (and earn money with them), but just don’t find the time to make the effort. If any of you want to help (and get either paid or become a partner), let me know.

I wrote this tool for a client who often makes changes to a few Excel files that are basically used like databases that the user can easily edit and extend.

For seeing the changes between two versions of these Excel files I needed a way to make them easily visible. MS Excel for Windows has apparently such a function, but the Mac version doesn’t. There are also Excel scripts that can help with that, but none were what I had in mind. So I took the diff code I had made long ago for Arbed, added LibXL (via MBS) and came up with this: 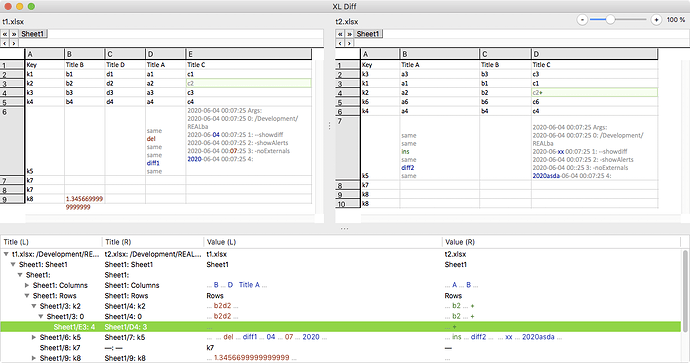 The window is three-fold: Two left and right show the contents of a specific sheet. The lower lists all found differences, and even detects insertions (including inserted columns!), deletions and changes.

The program is functional, can even deal with joined cells, and only compares text in cells, not formatting etc.

And it works best if each sheet only contains one such table or if the tables are clearly created as such.