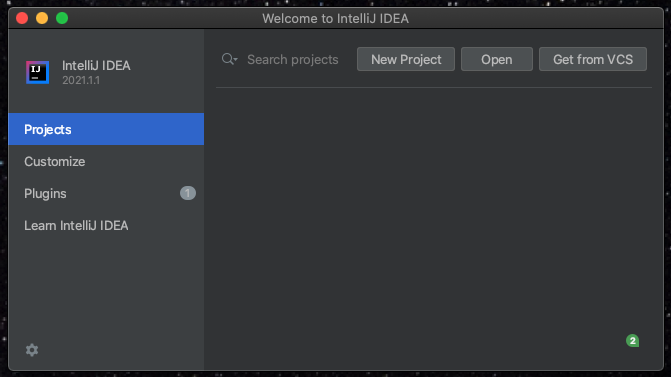 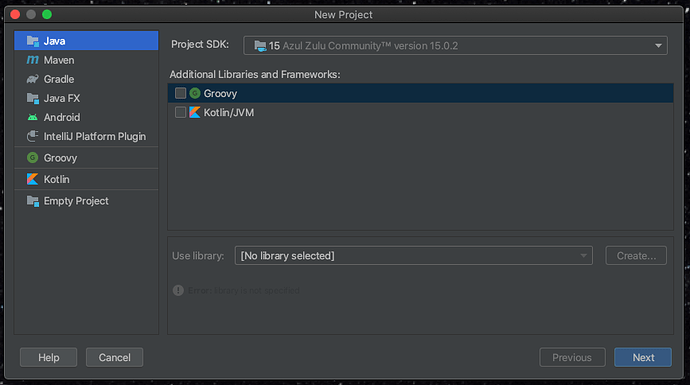 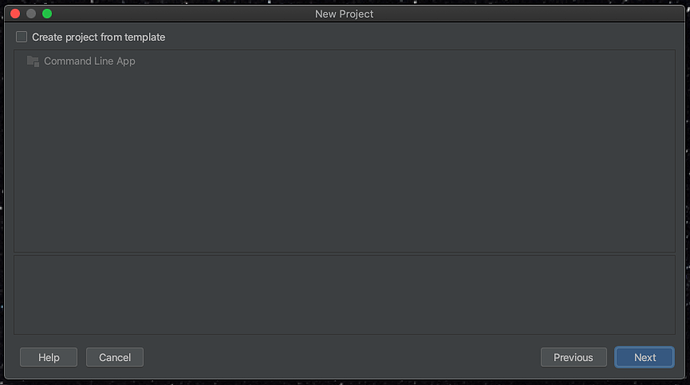 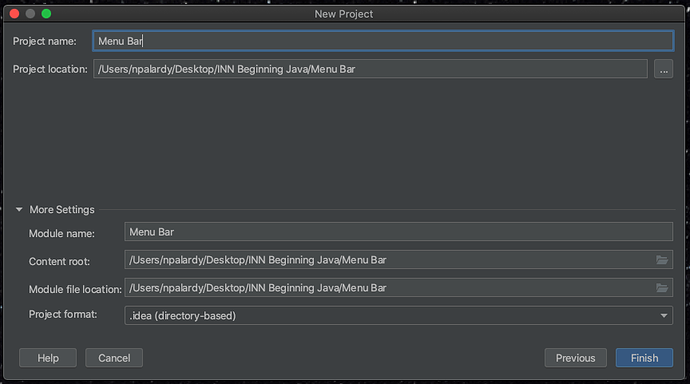 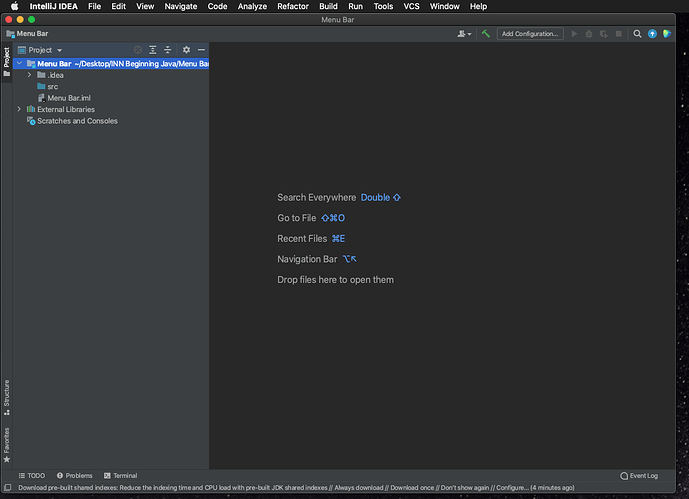 Right click on the SRC item in the project navigator on the left and add a new JFormDesigner form. 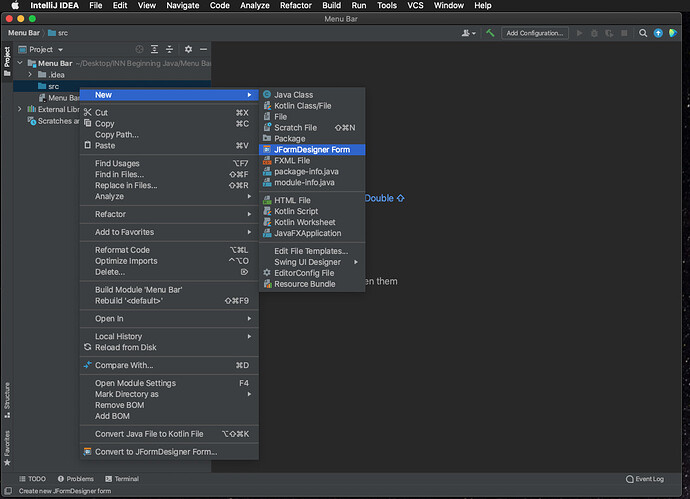 Make sure you make this items Superclass a JFrame ( a window) 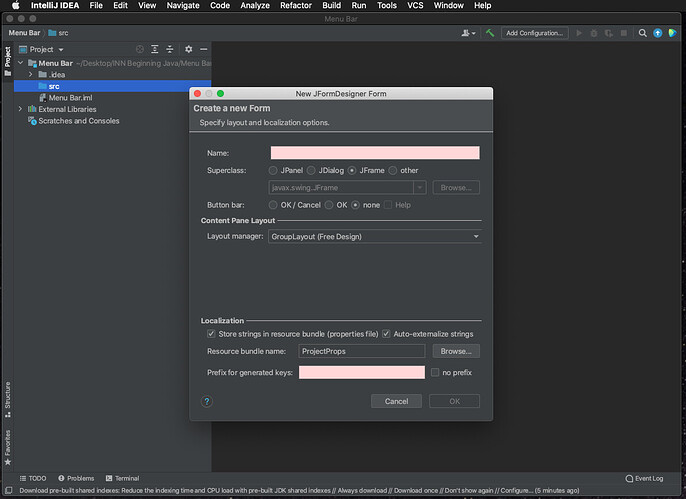 Now you should see 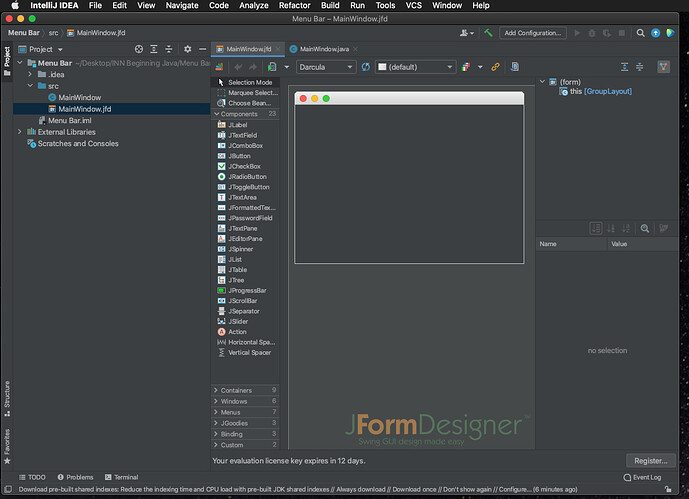 In the list of components to the left of the frame you should see several items listed - components, containers, windows, menus & several others.
Click in the one titled Menus to make it fold open 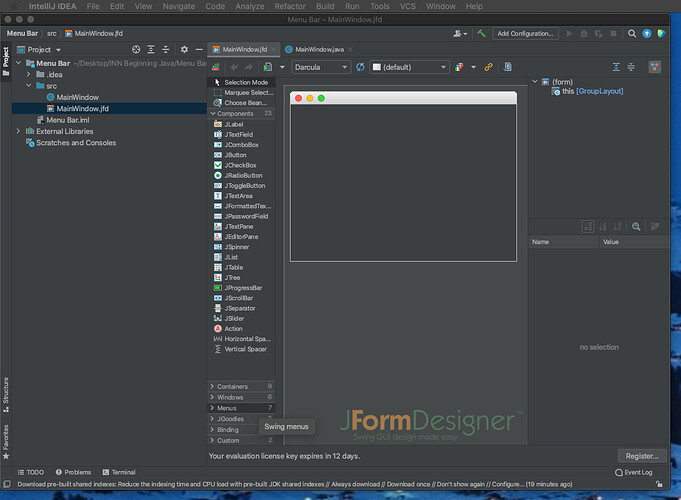 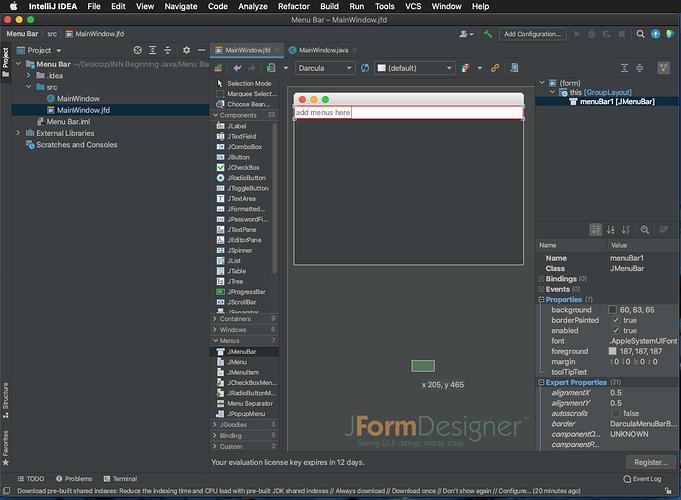 You add menus in much the same fashion by selecting the kind of component, this time a JMenu, then placing one under the menu in the menubar 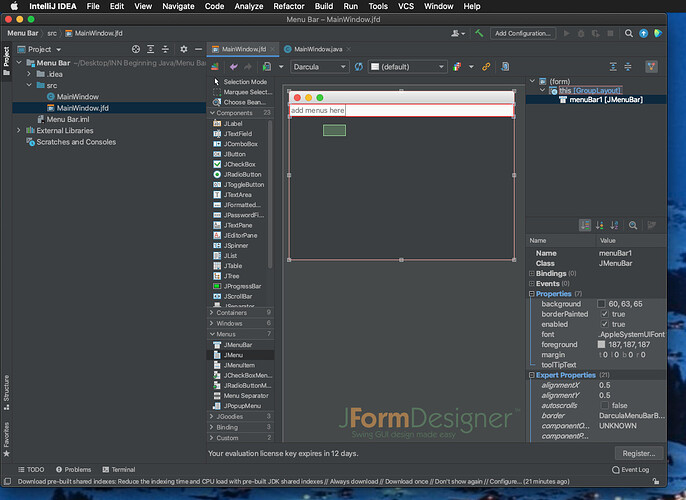 As we’ve been drawing our layout JFormDesigner has been writing the code for it in a companion Java file. 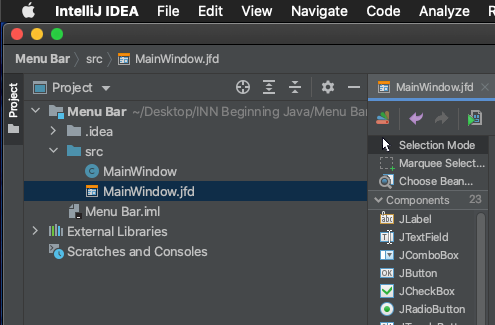 Make sure the Java file is open in a tab of its own. You can double click it in the navigator to open it. 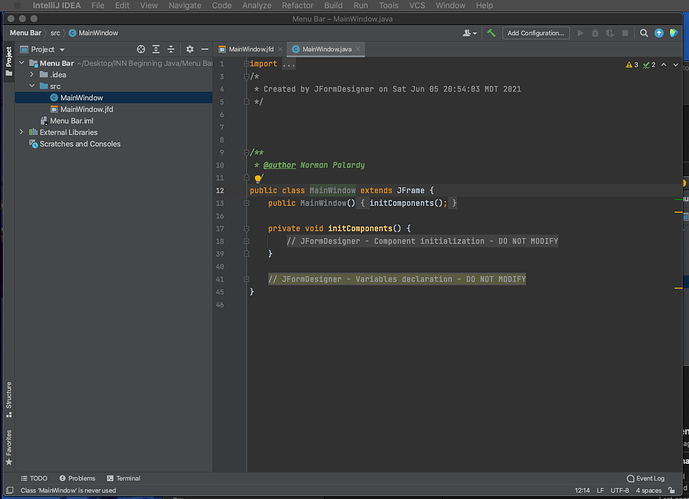 Since we’re still making just a simple app to demonstrate concepts we’ll make this a one window app so we’ll need a main entry point for the entire application.

This code creates a new JFrame as an instance of the layout we designed
It sets what default behaviour to perform when its closed, resizes the window to an appropriate size, and shows it.

Now, to run, we need to add a testing configuration. In the upper right corner of the IntelliJ IDE you will see Add Configurations 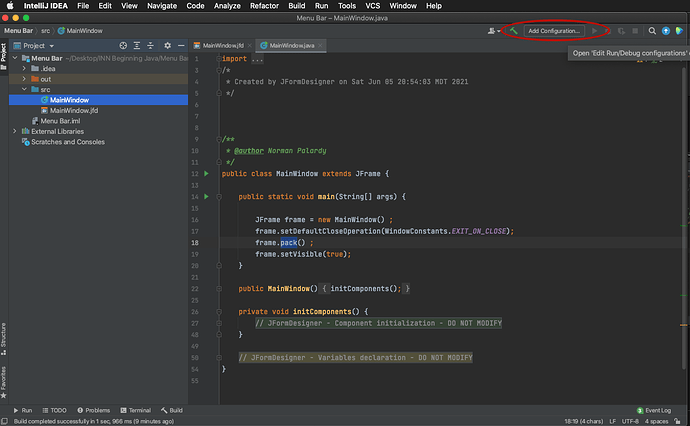 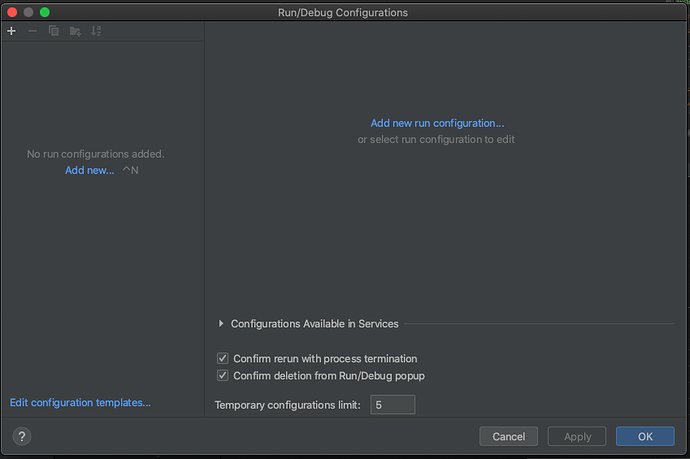 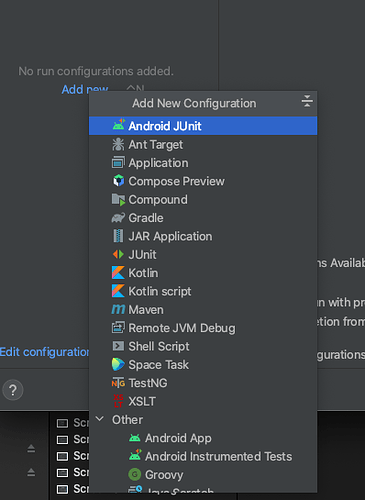 In the popup menu select Application 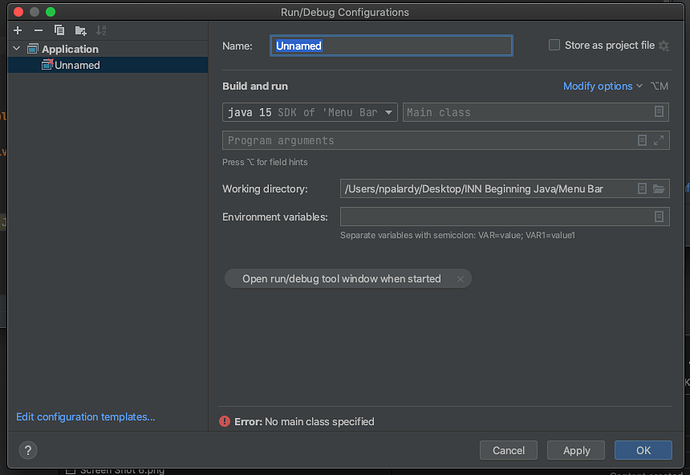 Name this configuration. It wont matter what as we’re only creating one for this sample.
Most of the settings are already correct. The only one we need to adjust is the main class setting 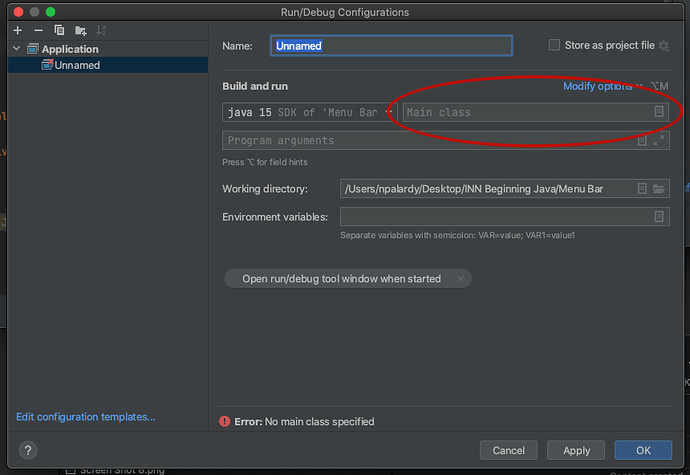 Click on that and classes with a public static void main method will be listed.
Since the only one is in MainWindow its the only one listed. 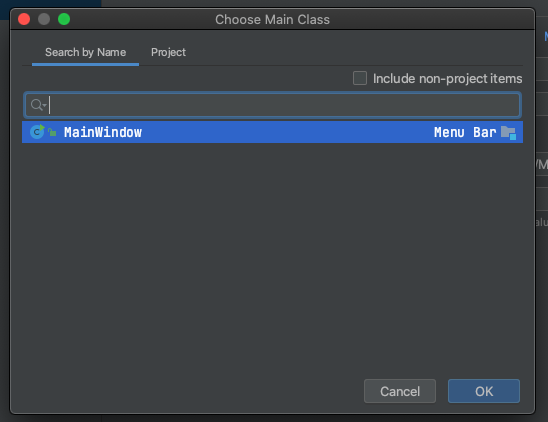 Select the MainWindow entry and press OK.
The second dialog will close and you can press OK again.
This will save the configuration.
And now that there is a saved configuration, you should see the run option is enabled in the upper right as well 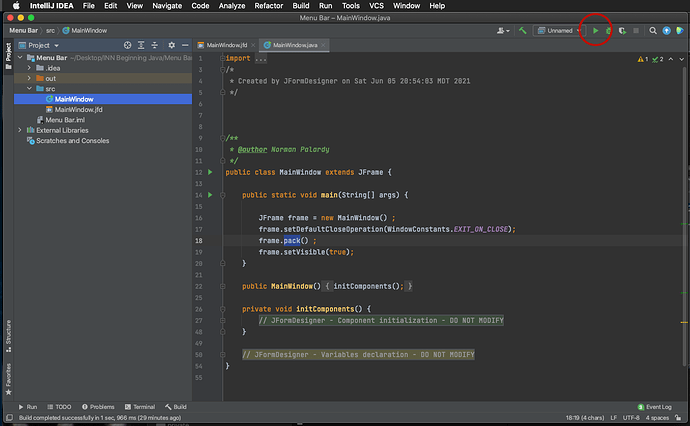 And, if you added several way back to experiment, 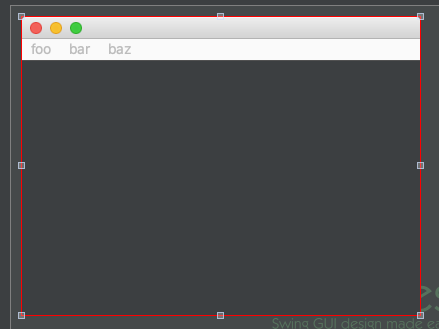 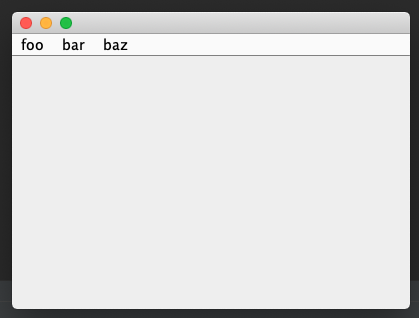 OK so how to fix the “not mac like” behaviour ?
We need to do a little work
First we need to change system configuration. But that only takes effect for thing that are not part of the current thread. (yeah java has real preemptive threads)
So what we need to do is change the config and then, later, start a new thread which will adopt this changed config.

So we’ll add a new Class - I named my MAIN 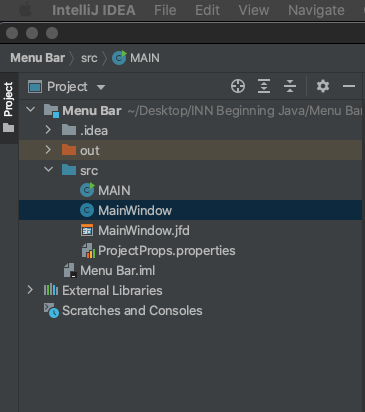 The other thing we re going to do is MOVE the public static main method from MainWindow into main
So you can cut that one out of MainWindow and paste it into MAIN.
We’ll need to modify a few things yet to get back to where we can run.
If you try right now you’ll find that it wont work as we configure the debug run to look for the main entry point in MainWindow (which we just cut out)

So lets fix that
Click on the configurations in the upper right. 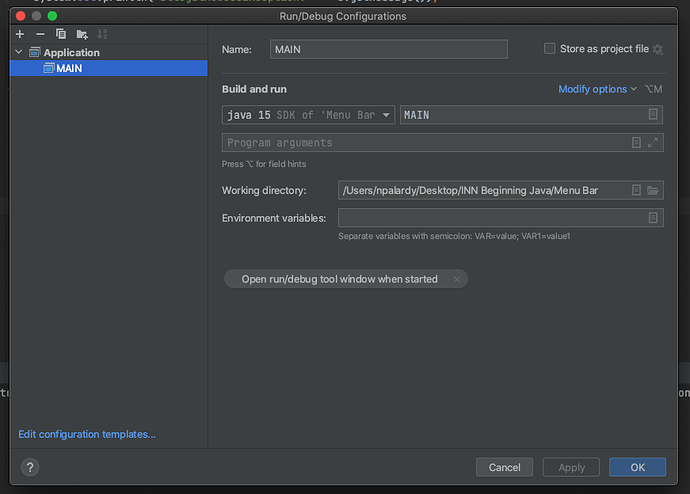 Then we need to start an instance of MainWindow in its own thread
The EASIEST way to do this is using something common to java, that xojo has NO equivalent for.
And anonymous instance of a class.
So in one line of code ( a rather long line ) we will 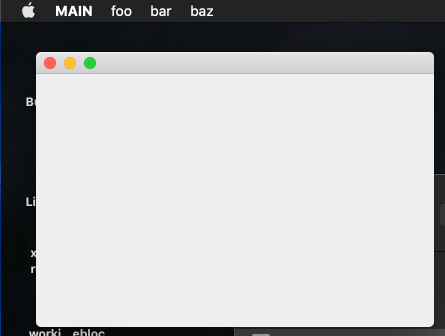 Something that looks a WHOLE lot more mac like !