Exceptions
Xojo and Java have a reasonable amount in common when it comes to exceptions.
So they should be fairly familiar.
There is one major difference though.
Java uses “checked exceptions” meaning the code you write either has to deal
with the exceptions it can OR declare that it will throw such an exception.
There’s NO ambiguity about which ones code may or may not raise which is different
from Xojo where its not clearly stated what exceptions framework methods might raie etc.
In java what can be thrown as an exception is part of the declaration of a method.

and try to run the Java compiler will balk at you

I’ve only been using VS Code for Java work for a very short while so I’m sure I’m not using it right here. but if you have this same code open in VS code and run it you get a very different result.
It runs but fails with the unhandled and uncaught exception when I really think it should not have compiled. 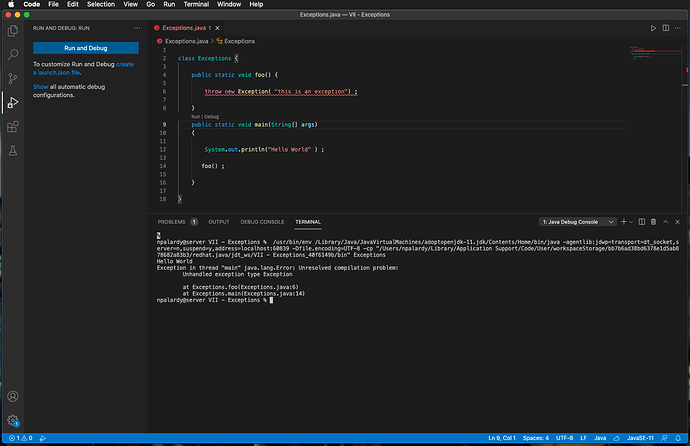 However, one very helpful thing it does give you is an accurate stack trace back to the source of the error

the last line, is where the foo() method was call in main.
And the one above that is the exact line of code that caused the exception to be raised.

And in the screen shot above yu can see theIDE has highlighted line 6 as a problem (which is nice)
If there were many you could navigate fro one to the next using Go > Next Problem or Go > Previous Problem
It makes working with a big java file a lot easier this way.

To fix one error we should change the decalaration of the foo method to say it throws an exception.
One thing you should NOT do is just shorthand everything and just say your method throws Exception, when it throws specific ones.
Thats not helpful to you or other coders in the long run
So alter the declaration to

Now if you compile at the command lline you see

and the compiler is pointing to the exact line where the thrown exception is not being caught or dealt with otherwise.

VS code similarly points to the same line as a problem. 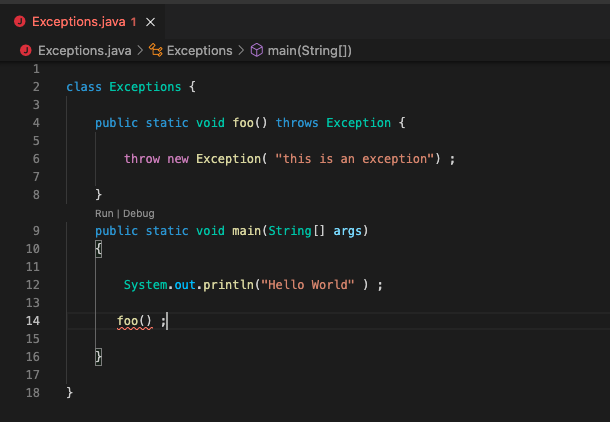 So now what DO we want to do with this error ?
In Xojo we might wrap it int a try catch, which is harder since we arent quite sure that exceptions might be thrown to know which ones we could handle and which we cant.
In a Xojo console app our little Java app in this chapter might look like

Java is not that much different

But its pretty easy to see how to move Java to Xojo or vide versa here.