I have FM 16 that I still use occasionally. Has anyone used FM since the switch to Claris? Is this just a marketing thing?

The feature I used most with FM is that I could develop on the desktop then just load it on my iPad and use FM GO with no changes.

I still use Filemaker. It’s a huge pain. If you think that Xojo’s pace is slow then Filemaker’s is glacial. You need to search for new features with a loupe.

You can do layouts for iPad which should work with FM GO. But I know more about Filemaker and AppleScripts.

I’m a certified FileMaker developer (17&18) - I still develop with it although I’m looking at Xojo to replace some of my projects with.

I use Filemaker 18 a fair amount, but due to intense information governance restrictions at my workplace it has never been possible to run server for the actual work apps and in any case, the actual cost of running server for any number of users is really quite steep.

Claris dropped the stand-alone runtime app functionality with no replacement in version 19, which is a pity as it filled a niche - hence my renewed interest in XOJO. I have not upgrade to 19 until there is a replacement for this or a GO-type app for desktop but certainly v18 is pretty good and all functionality in recent versions of FMP can be extended with javascript.

FMPA is a great product with a much more rapid development cycle that XOJO. It does only a fraction of what XOJO can do, but that’s like 85% of the functionality you need for database apps - obviously FM16 will have some limitations compared to FM18 or 19.

I don’t necessarily agree with @beatrixwillius as a blanket statement - yes the apps are nowhere as quick as xojo apps but usability is great from the enduser’s point of view and dev time is minimal and satisfying.

I do have a couple of apps i run in FM GO - the only real downside is that you can’t run these on Android which the use of these within our department sadly.

But I’ll likely end up going with Flutter instead for cross-mobile development - a much more robust platform i think… and free.

I’d stick with FMS 16 if I were you unless you need new features in FMS 17, 18, or 19 as there is an issue with Startup Restoration. I can’t find the thread, but it discusses what Steve Kurasch sent in this message to me.

I dev in FM three days a week. It’s pretty good and is stable unlike Xojo.

I spent years trying to find an alternative to FileMaker. I thought Xojo would be the answer, but Xojo cannot get their act together. I’m now coding in PHP/HTML/CSS/JS which is super stable and free.

I find Xojo at $700/year to be close to free, but right now Xojo is just a hot friggin mess. Maybe it’ll calm down in a few years. We’ll see. 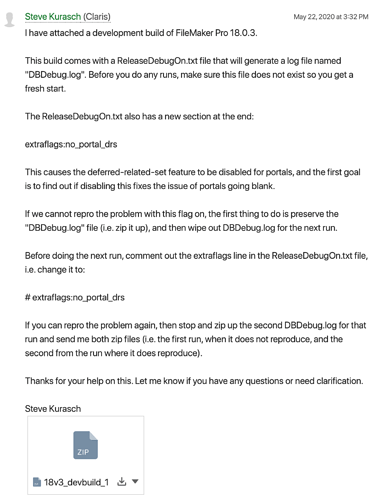 Well I was going to try it out thru their “Free not $99” offer… but they never responded to my request… and an email to customer service resulted in a “How can I help” from them, and then total ghost… .So I guess I’m not going to try to learn something new (well not FM at least)

thanks everyone for great answers. I think I’m going to take Hal’s recommendation and stick with FM 16 as it mostly does everything I need. With the exception of one on-going Xojo project, I work entirely on in-house stuff for my photography business. But I really need an app that I can run “full bore” on the desktop but being able to do some updates from the field on a iPad.

I knew the time was limited for the stand alone FM app so that isn’t a factor. And since it is strictly for in-house personal work, the expense of FM Server and multiple licenses isn’t a factor either.

I actually would love to just use Xojo but I played a little with iOS apps and it’s just a little too foreign to me. I have limited my Xojo license to desktop/database (used to have the Pro license) and turned off the auto renewal.

I’m working on a FileMaker Alternative in PHP. There’s no GUI, but no harder than Xojo.

In my experience, all versions of FMPA are super stable and work as advertised. In general it’s quite nice and quick environment for creating database apps.

BUT, and it’s a big BUT… you have to think about your business model; Claris is pushing everything hard though Server now and the cost of FM Server when you have any significant number of users is not to be scoffed at… it’s $$thousands per year. Server is fine if you’re a big developer that sells a product in that can include the cost of a server without breaking a sweat, but for smaller projects/devs/non-profit it’s prohibitive.
There is no ‘player’ time app that can run the databases on desktop like there is on iOS and there is no android unless you use the ‘WebDirect’ feature of server and access as a webpage.
If your model relies on using the ‘standalone’ runtime app, stick with v18 or less, they’ve removed this from v19.

This has largely pushed me away from using FMPA as much as I enjoy using this truly RAD database app – you can create an extremely complex and good looking database app in less than week (often 1-2 days). I do use this regularly for exploring/manipulating large datasets at work, but it’s not something I can easily share with others.

On the other hand i’ve been exploring LiveCode as a RAD and can say i’ve been very pleasantly surprised. They recently had a promotion ‘pay as much as you want’ for their Indy package and i invested some money in this.
The language is very different and takes a lot of getting used to. But it does compile standalone apps for MacOS/Win/Linux/iOS/Android.

More importantly it comes with a huge number of conveniences like textfields/areas with htmlText and rtfText properties, a proper data grid which can be configured as Form, where you can easily configure a row or column prototype with any controls/layout you like, barcode reader, native mobile controls etc etc. With an addition investment in externals you can fully control Office apps on all platforms – i can finally use Excel documents properly…

These conveniences simply don’t exist in XOJO and i can’t understand why they haven’t invested resources in creating such things, instead of the nonsense they’re invested in… Imagine you have a Text area with styled text – to save this you can simply save the htmlText (or rtfText) properties with no fuss.

I’m converting some Filemaker Pro projects to LiveCode, and i’m happy to say I haven’t yet hit that wall i hit with XOJO, where i feel like i’m fighting against the IDE all the time to get things done…

Imagine you have a Text area with styled text – to save this you can simply save the htmlText (or rtfText) properties with no fuss.

Um, the TextArea has styled text. And RTF.

Sorry i may not have expressed that correctly. Yes you do have styledText in XOJO - but there is extra legwork required to set/save state. In liveCode you can set/save the text, or htmlText or rtfText in a single line. It’s almost too simple to describe.

The point i was making was not about the features it was about the conveniences… although it certainly does have basic features that XOJO is missing, like PDF creation, a pretty good data grid etc.

These conveniences are often lacking in XOJO - which is weird when you consider they position themselves as a RAD environment and as a ‘beginner’ language (and so change weird things like array.append to array.addRow).
As much as i like the XOJO IDE and language, I don’t particularly find XOJO to be a RAD environment for my uses - to get anything to work i spend major time subclassing and adding functionality to controls that arguably should have been included at the outset.

I haven’t tried anything particularly taxing in LiveCode - very possibly XOJO would perform better in some tasks and there are probably things you can do in XOJO that you just can’t do in LiveCode, but so far i haven’t found that to be the case. Just posting that here for anyone else that might want to consider it…

Um, the TextArea has styled text. And RTF.

a very limited support for RTF… and while it has styled text… that isn’t HTML and there is no real import/export feature for it. It of course could be easily added as an extension (easier for HTML out, than in.)

These conveniences are often lacking in XOJO

You do know that you can often add those quite easily by using extension methods??

Eg to save to and load from a database:

or to save to and load from a file:

You do know that you can often add those quite easily by using extension methods??

At least that was what I took from this
Xojo could have a lot of things - it just doesnt so every developer adds them in some way (plugins, extensions, etc) but there isnt a lot of “communal sharing” of this stuff we all do
There never has been

Yeh I’m afraid you just proved my point. You can do this all in XOJO; it it looks 'proper professional coding ‘n all’… But it requires a coding effort from the developer.
Whereas LiveCode includes this by default in an way abstracted from the platform, succinct and simple – convenient.

For example, you can write:

These methods are out of the box, abstracted for all 5 platforms… convenience

Yes that’s pretty much it - the convenience has been striking and this what makes it more suitable for RAD. You can do a lot of this in XOJO. But it’s not out of the box, which means more development time/effort/expense (for plugins).

Of course each platform will have it’s shortcomings and limitations and i haven’t really used LiveCode enough to hit these. And undoubtedly there will be cases where the simplicity/convenience will be an obstacle where you want to do something much more complex – but for majority off simpler use cases this greatly speeds up things…

it’s the same for databases : you can do a lot in xojo, but it’s not out of the box.
believe me once you’ve made your own framework it’s really nice !

Do they know it can be done ?

Never done here (yet): put date as SQLDate in CellTag and display it as natural date to the users…

Tried (long ago) to use styled text from rtf files and displayed to the window and left that the same day (back to RAW Text). XPlatform project.