Hi, good to hear from you

We have fun here

I’ve noticed, I’ve read some of the threads

Are you including the Windows DLL’s for the c runtime ?

Those are just 1.7 Mb, and to avoid problems with the way Xojo uses it, it is better to allways incluede them.

That is not entirely true, if you add a built in control like HTML viewer, it adds an extra DLL as native render, but hundreds of files an extra 115Mb as chromekit.

Ja maybe I am somehow primed on Java cause I am following it for decades since it came up mid 90ies by Sun. Since then I read the same banners still today “Java runs everywhere” bla bla bla… I simply hate it, always did. The fact you need different JDKs remindes me to DLL hell on windows or ADODB dependencies where each version brought another easter egg…

I dont understand why people waste their money and time rushing if it is well know that new “big” features are always Beta quality, (and some times alpha)

The folks who have no long term “investment” and jump on “the latest & greatest” because they can reasonably simply do. The other might be because some critical bug is fixed

I am running a business, supporting existing software. The Xojo Pro license is just included in my other operational costs like phone, servers, office, etc. In my understanding I support Xojo Inc with my regular payments helping them to plan in long-terms. Yes there are all the downsides and problems with Web 2.0, the unfinished 2020 release, the missing love for Linux and open-source at all… but Xojo is quite useable in many other aspects and I (still) rely on it.

Well, in windows a compiled Xojo app with no more than a button is 33 Mb , the stand alone java version in B4J is 47 Mb But, add some extra functionality to Xojo and increases very fast, so, there is not really a noticeable difference

did not said this! But I second your point that Java always felt quite alien in every OS. I am still having ugly SWING classes in my mind… Bäh…

But indeed, that is the view of a decade ago. A lot has changed since. Absolutely no need to have different JDKs. In fact, Xojo is a lot worse. I remember having many versions of it installed on my PC, and for every project well documented with which version is was made to avoid breaking stuff by opening it in the wrong version. No such thing in B4X.

Absolutely! It has however sometimes more to do with licensing and being allowed to that by the major players like Apple and Microsoft than not being able to have that native look. There are several Open Source projects that show it is possible (after all, in Java the UI can be changed by CSS and you can make anything look how you want: MacOS, Metro-UI, …), but they are restricted to do so by copyright rules.

I mainly do Web so I don’t even have that problem.

If only Xojo would’ve stayed doing what they excelled in: desktop. But I understand. If after 22 years you are still not a (major) player, you probably never will. So one grasps at straws, tries to jump on the mobile/web train, having absolutely no experience in those fields. The result is the state it is in now: being mediocre. A shame really…

In my understanding I support Xojo Inc with my regular payments helping them to plan in long-terms.

A couple of rebrands, abandoned apis, reverting a mayor event renamig because they finally understand the huge mistake after publishing depite months of warnings, users having 3 different versions of Xojo to avoid a complete rewrite of some proyects because they broke backwards compatibility, etc… That doesn’t sound long term planned

Well, hard to resist but I have to defend Xojo a little bit…

A couple of rebrands…

I remember just one :Realbasic to Xojo… and that’s a decade ago isn’t it?

never got warm with the new API couple of years ago and something told me not to start a new project with it. Time has proven me right.

because they broke backwards compatibility

I recall my experiences between 2002 and 2007 in which Microsoft released in very short time frame plenty of .NET changes. I remember myself how I startet a major project back in those time with .NET 1.0 and finished it with 2.0. Nobody paid for all the changes made in the API. As somebody coming from VB6 I hated Microsoft for this. As soon as Apple announced iPhone, I’ve made the switch and left Microsoft as platform at all. Hence, today I am about doing the same with macOS switching over to Debian Linux as my main development platform. Due poor support of Xojo, Xojo could end up as collateral damage when I am doing the switch

I think it was Realbasic, RealStudio, Xojo and originally even CrossBasic (not sure about that last one)

You had the original framework, then the new Framework and now API 2

I remember just one :Realbasic to Xojo… and that’s a decade ago isn’t it?

It did originally start out as Crossbasic before REALSoftware existed

The classic API (API 1) and the Xojo framework used primarily for iOS, and now API 2

never got warm with the new API couple of years ago and something told me not to start a new project with it. Time has proven me right. 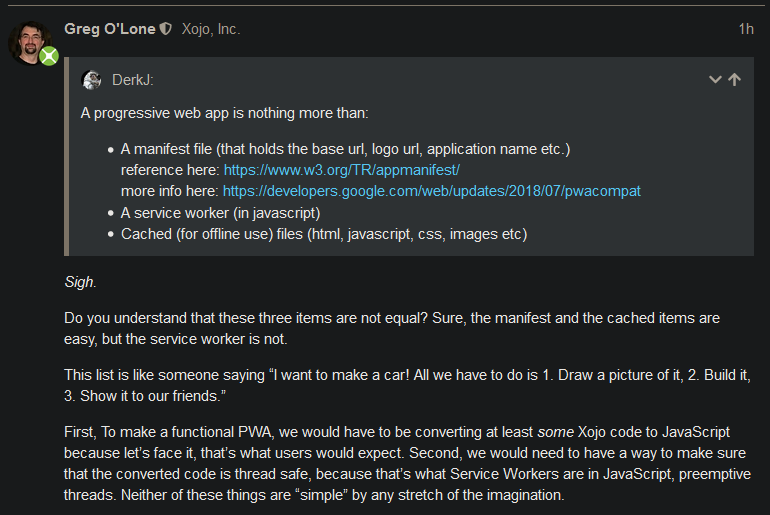 Why does Xojo always have to make things sound so complicated using terms like ‘preemptive threads’? Is this done deliberately to make the OP uncomfortable so he stops asking? Or is it a trick the engineers also use to keep Geoff of their back?

Just say as it is: Sorry, no, Web 2.0 can not do this, not because it is complicated, but because we took some decisions that make this impossible. Our long term plan didn’t take into account PWAs are coming fast.

Why does Xojo always have to make things sound so complicated using terms like ‘preemptive threads’? Is this done deliberately to make the OP uncomfortable so he stops asking? Or is it a trick the engineers also use to keep Geoff of their back?

Just say as it is: Sorry, no, Web 2.0 can not do this, not because it is complicated, but because we took some decisions that make this impossible. Our long term plan didn’t take into account PWAs are coming fast.

Sometimes it seems they are trying to “educate” people who seem to be technically knowledgeable about the subject. And that education is “here why this is complicated or not easy”

Having been on the other end of this sometimes saying “well here’s where what you’re asking for is hard to do …” can be better than just saying “no we cant do that”. How so ? Saying we cant do that can lead to a lot of “Well why not” and on and on down that rabbit hole

BUT, saying why its hard also can lead to the “well if you just did xy then …” on and on as well

Another review of Xojo, Filemaker and more
https://timdietrich.me/blog/xojo-filemaker-202009/

Begging for another Release System

I can’t think of a single time since we released the first web framework 10 years ago that we ever had to suddenly put out a new release because apps were broken by an update to a popular web browser. Remember that (as has already been stated)...

Keep in mind that some won’t and probably should not move their apps. If I had a large web app that was working fine and was likely to reach the end of its life in the next 5 years, moving it to Web Framework 2.0 would not be an attractive option. However, if I didn’t know how long it would be in use and liked some of the benefits of Web Framework 2.0, I’d be considering it.

IF you are one of these folks that should not (Geoffs advice) then your options really are sucky since you cant use the latest version (no web 1.0 in it) and are stuck with using an older vesrion which will NEVER get any more fixes.

That exactly is one thing I always wanted to ask you @npalardy : what do you mean with not behaving quite native? Differences in File Chooser and so on? Cause the rest behavior of Windows is the same in my eyes. I would be happy to get what your problem is with Java cause maybe it will be also a future Problem for me.