which as far as I can tell it IS correct

Hello,
the bundle identifier usually is like
„com.apple.calculator“ oder „com.apple.gamecenter“ etc.
Maybe you need to add „com.“ at the beginning of your current identifier? 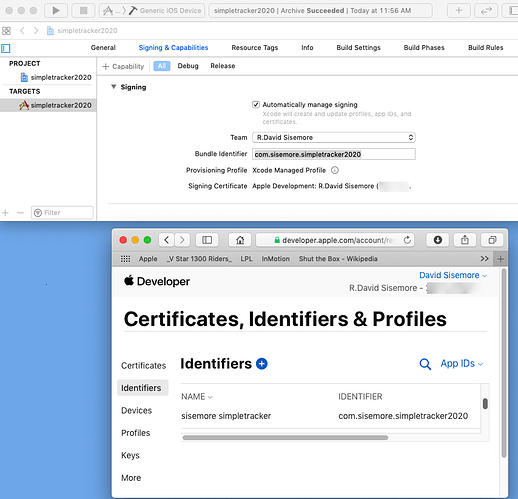 The App Store is having serious problems at the moment. Judging by the number of issues reported in the Developer Forums and reports that problems have been going on for at 3 weeks, I’d say it’s reaching critical mass and maybe likely to keel over completely.

But hopefully the combo I have now will stay connected properly.

except that Apple is refusing to sell my latest app until it works with In-App-Purchase.

It’s not a requirement as per say. All I know is that I got flagged as an App Spammer and had to pull down almost all of my apps from the App Store, I didn’t mind so much because I thought they’d let me sell my latest app there, except they didn’t.

Basically we had 3 versions of the existing application.

This is considered App Spamming. In order to get the latest all-singing all-dancing version in the App Store, it has to be combined with one of the other two.

It’s been an absolute horrible experience, and if I didn’t need the money, I’d just walk away from developing Apple software. I’ve been getting the feeling for some time that Mac developers are no longer welcome, I keep kidding myself that once I get over this issue, it’ll be better, except I’ve not been able to get my app into the app store since July 2019.

Oh and this for the app that won a Xojo Design Award this year.

t’s not a requirement as per say. All I know is that I got flagged as an App Spammer and had to pull down almost all of my apps from the App Store, I didn’t mind so much because I thought they’d let me sell my latest app there, except they didn’t.

Oh I do recall reading about this
Shitty from Apple

Oh and this for the app that won a Xojo Design Award this year.

@Sam:
Do you have an iOS version to compare with macOS applications ?

During my last visit to the brick Apple Store in Strasbourg, I had the feeling I was a secondary (or worse) buyer because I was talking about MacBook Pro; some years ago.

Hey Emile,
I don’t. Currently this is application is a desktop app, as it’s design doesn’t translate very well to a small screen. Check out machdr.com

I asked a question and retain a part of it in my beard ! Sorry.

The question was about a difference between iOS and Desktop treatment by the Apple “controllers”: a better reception when one presents an iOS application vs a Desktop one.

No need to apologize.

For me personally, I don’t see this, but I also haven’t visited a brick and mortar store for years, due to the lack of products that I’m interested in.

The only evidence I have to hand right now, is that my bug (which breaks In-App-Purchase subscriptions) is most likely in the OS core which is shared across all their operating systems. I see in the developer forums reports of other developer targeting iOS having a similar (if not identical issue) and further more there are reports from developers indicating that their customers subscriptions are not being renewed and encountering issues when attempting to do so. Which is my fear, and it appears true.

My guess is that Apple doesn’t care less about the Mac than iOS, it’s just that Apple cares more about maximizing profit over the quality of the product, which is a very bad sign for a company of this magnitude. The more they push to produce their product cheaply, the more customers will be disappointed and less likely to choose Apple products in the future.

I’d be willing to overlook the cheapness of this 16" MacBook Pro, if I were able to use it for macOS development, but I am not and Apple asked me to make a decision to either keep a machine that doesn’t work or give it back.

I will defenitely be a customer.