Moving away from Xojo

Uno Platform, which is arguably the market leader for building multi-platform application with .NET

The other two options being Xamarin.Forms and .Net MAUI

If you’re familiar with WPF or UWP then you should feel right at home with Avalonia. Although Avalonia is not API compatible with either of these frameworks (and so controls can’t be used without porting), there’s a lot of similarity. If you’re a WPF user we have a page which describes the main differences between WPF and Avalonia

This caught my attention. UWP is not a concern since MS has all but deprecated it. But it appears Avalonia has created its own API which appears to be a hybrid of CSS/WPF/UWP and uses Skia as its default rendering engine. Delphi has taken a similar direction using Skia4Delphi and WPF. I watched a Webinar on Skia presented by Jim Mckeeth yesterday and it appears Skia is the way to go for GUI elements especially animated GUI elements (lottie) … because it’s just so blazingly fast. Avalonia definitely looks like a great choice for those in the C# .Net camp!

You need to read between lines. In Dittofi you can download the source code of your application and host it and run it anywhere (on local or remote server) you want.

For me that is the part that is important - be able to get my hands on the source code in Go!

Now I can do any kind of tweaking to code as per my needs!

Recently I am playing with another RAD framework called Frappe Framework for building Web App. This is not suitable for building games. It is best suited for building business apps and web sites with very little coding!

Of course it is written in Python.

After having tried my hands on many opensource frameworks (including AB Material which is specifically developed in and for B4J), but in all of them the amount of work involved in building descent web applications is just unreasonable from my POV.

But to my surprise Frappe Framework is so simple to learn and use with minimal coding.

I have come across a developer in Uganda who has created a chatting web app which is a near clone of Signal using Frappe Framework.

Of course the biggest proof of its flexibility, usability and power is ERPNext.

Futter 3 (and Dart) have added macOS and Linux desktop support

The desktop flavors are useless for me at this moment. Stable? ok. But so feature incomplete that I feel playing with an Alpha. I guess they wont be feature complete this year. The multi-window support, for example, is being designed since 2019 and never reached beta. They released a very premature “desktop” version. To make simple things like moving the only one window on top of the others makes you writing a plugin today.

Always enjoy learning about the pros and cons, thanks @rick.a for your input

And I always hold updates until a lot of early adopters do the crash tests.

Brace yourselves until v3.1

Looks like the Uno Platform is moving along nicely.

Uno Platform Does WebAssembly Threading Months Ahead of .NET 7

that’s changing - the current roadmap includes compiled (rather than interpreted) code which will bring it in line with most platforms speed-wise.

But above and beyond speed of standalone apps, LC provides may coding conveniences which makes development much quicker in many respects.

Other than not previously providing compiled apps, there is no limitation in LC compared to XOJO and many other platforms. It has a mature Mac/Win/Linux/iOS/Android platform as well as server and web platform. The current version (10) is in developer preview and provides web apps based on WASM, much faster/smaller than the previous offering which was fairly functional anyway…

It is very different to any other language most here will be used to and does take some effort to familiarise yourself with the code/coding practices. But once it ‘clicks’ it’s a joy to use… And they have a very friendly and functional forum which serves as a proper community hub.

The concept of windows/views has it’s roots in venerable Hypercard. It actually works extremely well, but coming from environments like XOJO takes some getting used to

Datagrid is an amazing beast but can be daunting for those not familiar with it. It does have a learning curve but once you’re past that you can make any degree of complex grids with multiple controls in any form of row layout, using a programmable row prototype which you lay out visually. It takes minutes to churn out something quite complex and has a great API for manipulating it’s data.

The current version (available in their summer megabundle, check out Megabundle – What’s in it | LiveCode) also includes 2 new plugins for simpler data grids (Polygrid and Data View) which look good. I’ve played around with polygrid, its simple and faster than the built in Data Grid, but with less features/customisation.

Also worth mention is Appli, a low-code environment based on LiveCode: https://appli.io

It is not Basic like and there is no Visual IDE like Xojo or WinDev or LiveCode.

Looks nice except that … no custom SQL

When you posted this I did not have much experience in Dittofi.

But after building 6 applications I can say it is quite powerful and has support for writing Custom SQL and in near future it will have a powerful Query Builder tool for creating custom SQL and also testing them out!

has support for writing Custom SQL

Their web page says you have to pay $1,500 Monthly to have the custom SQL

The desktop flavors are useless for me at this moment. Stable? ok. But so feature incomplete that I feel playing with an Alpha. I guess they wont be feature complete this year. The multi-window support, for example, is being designed since 2019 and never reached beta. They released a very premature “desktop” version. To make simple things like moving the only one window on top of the others makes you writing a plugin today.

hello, you are still trying to make desktop app ? i was suprised too by the time he took them to make deskop version . seems like it not as easy as it seems…

i was suprised too by the time he took them to make deskop version . seems like it not as easy as it seems…

The initial release (An alpha) was 5 years ago only for one platform. Now they target Android, iOS, Fuchsia, Linux, macOS, Windows and web from a single codebase. but, desktop was moved to the stable until this year.

5 years to deliver WORKING mobil, deskto and web, that is less than what is taking to Xojo deliver a half baked Android

Their web page says you have to pay $1,500 Monthly to have the custom SQL

That is surprising. Can you post the link to the page?

That is surprising. Can you post the link to the page?

Right in the home page is the link for the pricing:

HPricing for Dittofi. For a monthly subscription, we give you access to the Dittofi Design Studio, hosting, support and enterprise level SLAs 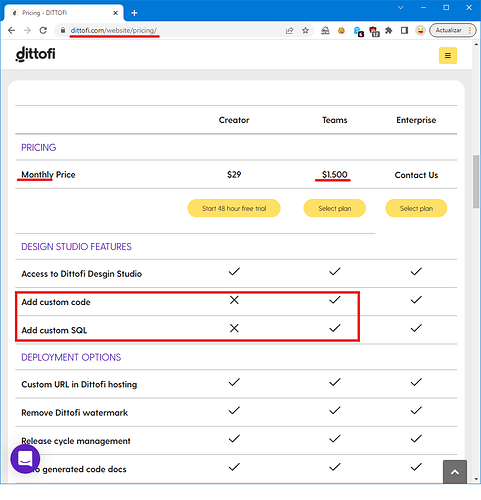