As many of you know I have been working on an IDE to create Swift apps in a manner similar to how Xojo works. At this time I have a fully operational app (written in Xojo) that creates nice GUI projects for iOS (iPad/iPhone). And had started a version to do macOS projects but written in Swift. The version to do macOS apps had much better interface controls, so I have decided to modify it to do BOTH macOS and iOS GUI projects. Right now I’m at the beginning stages and have the basic IDE working somewhat.

I want to make sure I have all those things done up front to make it easier to move to the next phase. 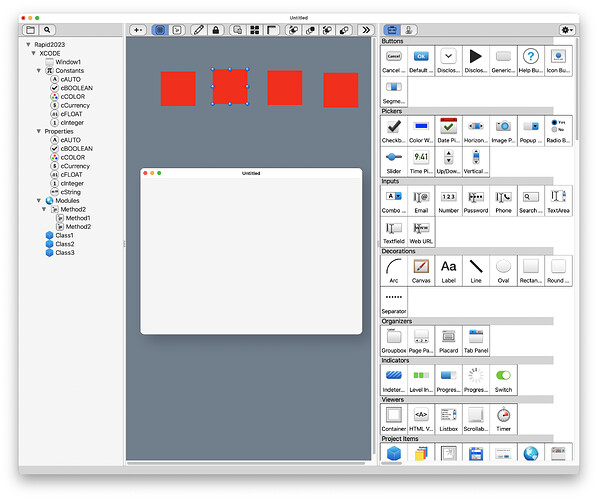 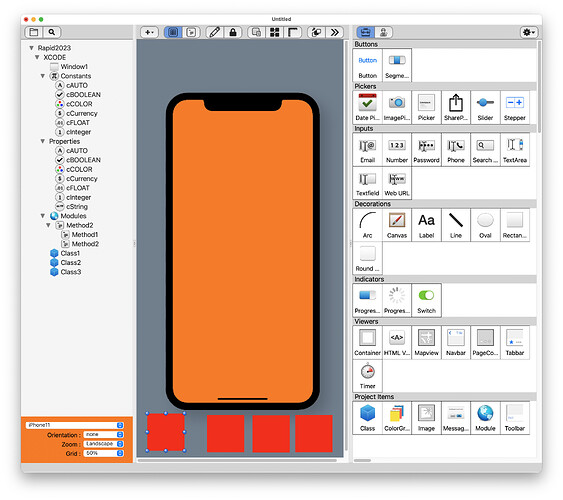 IMO, the switch control should not be in the “Indicators” section, as it’s actionable. Possibly better in the “Buttons” sections.
My two cents.

I agree… Thanks… Xojo classifies it as a “picker”… huh?

Nothing says it HAS to be categorized the same as Xojo’s does it ?
Unless you are shooting for a “clone”

Oh of course not… hence the “huh?”
I want to categorize things “appropriately”

checkbox & switch should both be in Buttons IMO

You may want to consider adding some of the AppKit’s and UIKit’s “container” controls, such as collectionview, stackview, etc., so that one can can create modern looking iOS/macOS apps, though they require a lot more work, I’m afraid.
Limiting yourself only to the controls that Xojo offers is quite limiting, but I’m sure you’re aware of that.
Unless you want to use this only to convert Xojo apps into Swift apps, of course.

Apart from that, looking at my “Favorites” in Real Studio, I’m missing:

Overall, I’m impressed what you accomplished so far.