Xojo, inc. had no Idea what they are doing when they started to change everything in xojo. Only thing they got was there Idea of programming in basic near Visual Basic. And this they try to keep alive. API2.0 was a real step, Web 2.0 was the next step. Renamings of commands without any sense behind (msgbox to messagebox) and changing syntax to many different syntax styles you may find in xojo making the business even harder.

So I decided to switch my Devices away from a xojo standalone Webserver to a B4J Desktop App with Apache Guacamole on Raspberry PI 4 and my customers agreed to change with me. So we can develop our solutions and do cross platform apps also and have the chance to rework our code for native Android and IOS use.

I am sad because of the behavior of xojo and their Ideas of development. We will have small Apps in the market but not anymore our core business written in xojo for GUI. It makes problems and errors will not be fixed, development under Linux with xojo is much slower than developing B4J under Linux with Wine emulation.

Beside this fact: B4J copy paste works under Linux, xojo not. It is not to understand why they behave so. When I just tried the Windows xojo with codeweavers crossover I got that the Windows IDE is even with Wine under Windows is faster and more stable than the native Linux Version. And with the compiled Software I have the same issues at the end: doing benchmarks with Linux and Windows, Windows is faster…and do not tell me that is founded on Linux. Doing the same with C++ Linux wins all the time with at least 10% better performance.

So: how to decide for xojo? If it is a small Webapp, uploading or downloading some stuffs, xojo is a good solution for. If it is a complex app with rich functionality xojo will not be the right choice. That’s what happened the last years. In the behavior of xojo, in there Idea of changing stuffs and in the end also because xojo was not getting how to do stuffs correctly.

Thanks to all which where supporting me in the last years in the xojo scene. It is a hard decision for me because it makes me sad to smash 5 or six Manyears of development in the trashcan but there is no other way because of the outstanded errors and not corrected IDE problems.

Sorry to hear that.
Last week I deployed my first in-house webapplication - rewritten in Java. So my migration has also begun.

I can understand you. I followed your posts in both forums and saw your business behind.

Actually I do not have to make a living from software development but I tried to and started with Xojo. When the first problems came up I reported some and found some workarounds. I started to realise some limits from Xojo (and from me

I followed the discussions here and as far as possible in TOF. I share most of the opinions. So I started to look for an alternative. Now I try a small App in B4X to see if this is a suitable way for me.

Hello Christian, we use already B4J for Desktop with success. It works without problems. You can provice your Jar Files in obfuscated release mode to protect your sourcecode better, works also

At the Moment I am in Banano to use it as a spare for Web cause Banano has the Web capabilities we have only with xojo web. Will be a bit of way until we have it at the point for us. There is no future in xojo as I can see cause they are not reacting to their customer problems, only thing they do is widening their features and capabilities but not cleaning the errors they are producing. That makes it impossible for professional use in my view. But the Idea behind Xojo is brilliant except the way they are going with IOS and later android: also this we are doing with B4J in the meantime cause android was never getting production ready at their side and IOS is still not really production ready (for example database access). So I decided that I will change to B4J for my customers and byself to C++ with eclipse and Java also with Eclipse.

At the Moment I am in Banano

I’m the developer of the BANano transpiler so if you need any assistance or are missing some functionalities, please let me know and I’ll see what I can do.

Later. Thanks for reacting this fast. I need to look on it more intensive first cause fopr my customers I have to write a documentation. 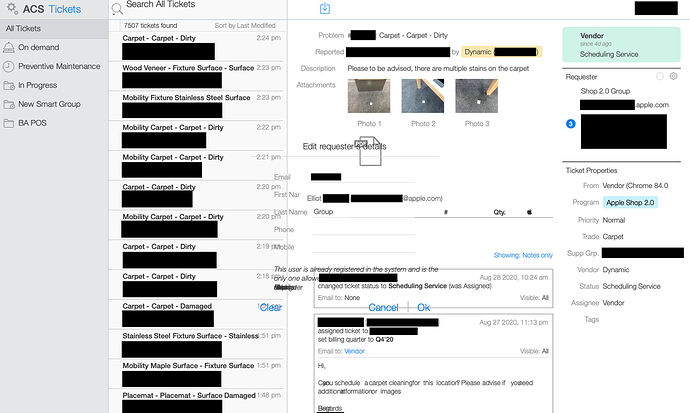 A group of hackers has been awarded over $50,000 by Apple for discovering 55 vulnerabilities in the company's systems. Sam Curry,...

Make your own thread for that

@Emile yes make an own thread it is really interesting

Since several years, I’d like to understand why anyone would post to an existing thread with unrelated content.
Not against you, Emile, just a general wondering.
When I see someone answering to an existing thread instead of making a new one (even since ten years ago), I’m always thinking “Was it easier to hit the “Reply” button to write a new subject instead of making a new thread?” or “Did the user not notice he was still inside a thread when he thought to make a new one?”.

Wondering, as it happens regularly all around the Internet and I don’t see much how the mistake is done…

Ironically, perhaps I should have made a new thread for that?…

Ironically, perhaps I should have made a new thread for that?…

To come back to the point of this thread I wrote you this Answer and because you especially wrote yesterday about that I was wroting in this forum to take it as one reason to blind out my thread-Answer.

Are you mistaken somebody else for me?
Verwechselst du jemanden mit mir?

Because I have no idea what you are talking about.
Weil ich hab keine Ahnung was du meinst.

I‘ve been mostly off the forums for the last few days as my xDev articles are due.
Ich war die letzten Tage kaum in den Foren da meine Artikel für xDev fällig sind.

Funny enough, I understood some of your sentences better in german than in english

I was mistaking I will change the Text cause I was not writing what I wanted: Markus T. when writing my reply I should have pressed reply not under your reply. I am sorry for that.