File names with umlauts in the name not handled by Xojo

but when I do ls -al in terminal its 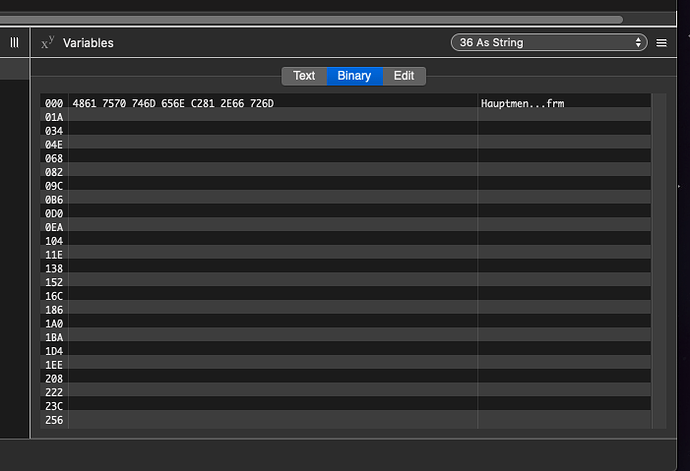 in a hex editor its

Can anyone offer any assistance on this ?

Ran into this trying to transmit binary from a language that insists strings be utf-8.
I had to go out of my way to prevent binary data from being converted. A hex dump was full of extra 0xC2 plus another wrong byte.
In the first hex dump, 0xC2 is a utf-8 escape for binary codes over 0x7F.
UTF-8 0xc281 decodes to 
The second dump is a ‘latin1’ / ISO-8859 (8 bit binary) &xFC = ü
I’m not sure if this gives you any more idea about where to look for the ‘helpful translation’ section.

Is not this a 2-characters vs single-character trick?
Like you have é alone but can also have e and ´ separated (proven by the fact I just wrote them). IIRC, both can be combined in a “single character” and has a different code point than the all-in-one version.

MS and their way of making universally compatible stuffs…

and the ü is encoded as a single byte &hFC
The zip file, when uncompressed on macOS gives me a file that has the name with that single &hFC encoded in an encoding I dont recognize and its 2 bytes &hC2 &h81
So far I havent found any combination of convert encoding / compose / decompose etc that turns that &hFC byte into &hC2 &h81

f is the dir that contains the unzipped manifest & vb files

But F2, fetched by URL, will not be nil AND exists will be TRUE

oooooo !!! this might work even better than the hacky way I have it now !

I need to do more hunting

This should match the 2-byte encoding from https://en.wikipedia.org/wiki/UTF-8