Amount of work vs. team size

Just like their blown-up accumulated number of users, forum members, apps made with Xojo etc… And ‘The biggest Xojo event of the year’? It had almost no attendees (out of the self proclaimed 450000 users). Social media and even TOF (20000 users!

) showed little to no interest to it. 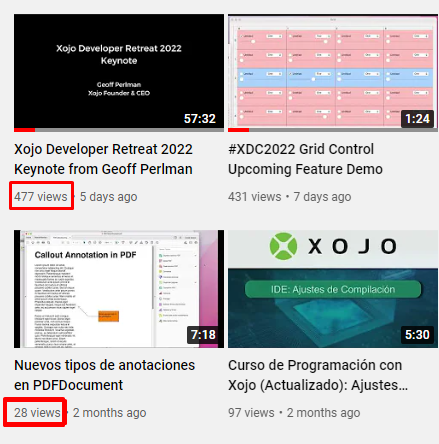 I was more interested on the real sessions more than in the usual marketing but continuing with the dumb moves, all the interesting videos are behind a payment wall.

With less and less sites writing about xojo, they should capitalize every single piece of content to promote the tool but… Maybe they need the little easy money more than they need customers?

Maybe they need the little easy money more than they need customers?

Seems so, who in their right mind pays 199 dollar for some pointless conference videos? Which every other dev company on earth would give for free

Thanks for informing. There is not the entire team named anymore but the core team (Leadership Team). That helps to see: they don’t want informations be outside about their Team.

It is common practise that larger companies do present their senior executives to the general public but not the entire staff.

The Emperor has no clothes!

It may be that new Users getting impressed that there is such big team. Let’s have a look on it in that wise. Marketing directer? They have an own marketing branch and the director leads it. Needs a big bunch of marketing specialists. That is what they want to get.

On the other side: no hiring. That makes business simple.

What strikes me is this - LiveCode are a company in a similar market segment. They are also under special measures after being insolvent a few years ago - they are working under a corporate voluntary arrangement that means they have agreed a plan with their creditors and have to work to pay back a percentage of the outstanding debts.

Even working under such a plan - look at the size of their development team!

LiveCode has 12 developers. That seems about right for a small-ish development company. I think that’s about what Xojo should have too.

So either they can’t afford more developers or they choose not to have them or it’s a combination of both. Regardless, I’ve called BS on their ‘adequately staffed’ mantra for years. More bugs get added every release than get fixed and isn’t the very definition of insanity doing the same thing over and over again while expecting a different result?

But they have a better Situation: while they have all platforms already and you can work with them immediately they can sell. And the pricing is a bit like Xojo Pro. Makes it simple. But at life code you may see development all the time. At Xojo you see the promise Android will come soon for half of a decade. That’s the difference.

Only thing I dislike about the LiveCode model is that if you fail to pay your annual fee you lose the ability to develop using the product.

True. But that is something You can also have with other platforms for free. Take a look at Quasar framework for example.

I listened to the Xojo keynote yesterday. What Geoff says is high velocity spin and not worth paying much attention to.

I honestly believe that Geoff has made a conscience decision to keep the development staff small. He’s definitely had larger teams in the past. Maybe it’s money related or maybe it’s about his ability to (micro) manage a smaller team vs a larger team.

I wonder just how much damage API2 did to the cash flow?

From what I can see at this stage. Xojo Inc needs a large chunk of external investment, or Geoff can control his costs and attempt to milk a declining sales volume into his retirement.

attempt to milk a declining sales volume into his retirement.

I wonder just how much damage API2 did to the cash flow?

The price increases came suspiciously close to the release of API 2.0.

I have seen the same pattern at my previous platform:

Coincidentally, Xojo and Filemaker are small niche players in a large and fast-evolving market.

Is his pension enough to feed the team?

What I am getting at is there are two possible trajectories.

It is not so that the millions of users are coming and watching. I guess they are hiding themselves

As for your suspicions it leans harder & harder to #2
While I’m sure Geoff would like to see #1 happen REAL/Xojo has, I’ve been told by others, been roughly the same size since for a very long time - this predates my tenure at REAL/Xojo
So I really int know what might have spurred its growth to its current size - I truly suspect having a Mac & Windows version was it

I honestly believe they are at the same point Apple was when Jobs finally decided to hire Scully.
They have tried things to grow and dont know how to go from where they are to 10x revenue.

I honestly believe they are at the same point Apple was when Jobs finally decided to hire Scully.
They have tried things to grow and dont know how to go from where they are to 10x revenue.

First thing Jobs did when returning to Apple was focusing on things Apple was really good at and scrapping the rest.
An organisation that is stuck in escalation of commitment needs serious change management. This never happens if not sponsored by top management.

Insanity is doing the same thing over and over again and expecting a different result.